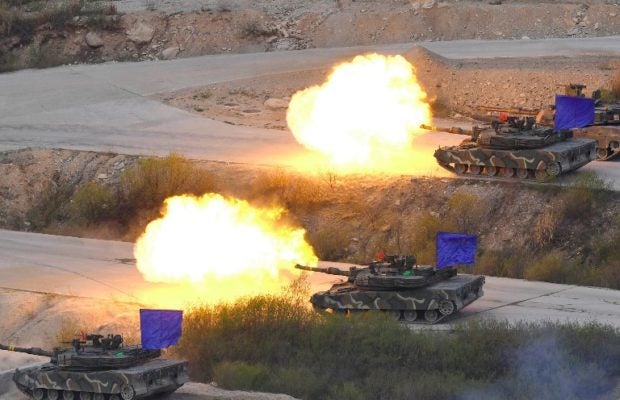 WASHINGTON, United States – With US-South Korean military drills back on the table and the cancelation of a top-level summit in Pyongyang, Washington is toughening its stance as it negotiates with North Korea.

Discussions have grown prickly after a historic summit in June between President Donald Trump and Pyongyang strongman Kim Jong Un, where the leaders embraced and pledged to work toward the “complete denuclearization of the Korean Peninsula.”

But despite the bonhomie of the occasion, Pyongyang has taken few concrete steps toward that stated goal and signs of frustration abound.

And on Tuesday, Defense Secretary Jim Mattis said the Pentagon is not planning to suspend any more military drills on the Korean peninsula.

“We took the step to suspend several of the largest military exercises as a good faith measure,” Mattis told reporters.

“We have no plans to suspend anymore.”

It will do so “when it is clear that Chairman Kim stands ready to deliver on the commitments that he made at the Singapore summit to President Trump to completely denuclearize North Korea,” he said in a statement read aloud by his spokeswoman.

Carefully calibrating his words, Mattis would not say when exercises would resume, apparently leaving some wiggle room for North Korea.

“We are going to see how the negotiations go, and then we will calculate the future, how we go forward,” Mattis told Pentagon reporters.

The next large-scale US-South Korean drills, known as Key Resolve/Foal Eagle, are set for next spring.

While North Korea views the exercises as a “provocation,” they are loathed by China too. Trump last week berated Beijing, saying it was not helping enough with denuclearization.

Trump has staked a lot on his talks with North Korea. He prides himself on his being able to make deals and after the summit, he famously declared: “There is no longer a nuclear threat from North Korea.”

Vipin Narang, a professor in security studies at Massachusetts Institute of Technology, said recent developments are the first public acknowledgment that Trump is frustrated with the pace of talks.

But North Korea holds important cards in the talks, he said, noting Pyongyang’s moratorium on missile and nuclear testing could be conditional on negotiations continuing in good faith.

“So if all this falls apart we could go back… Kim Jong Un could do something like a satellite launch,” Narang told AFP.

Nikki Haley, US ambassador to the United Nations, insisted talks are headed in the right direction.

“Is it moving fast? No, but we never thought it would. We knew that this was going to be a slow, tough process,” she told an audience at a Washington think tank.

Last month, officials told the Washington Post that Pyongyang seems to be developing at least one or two liquid-fueled intercontinental ballistic missiles.

When asked if the Pentagon agrees with Trump’s assertion the North Korea nuclear threat is over, Mattis pointed to the calming of tensions that spiked last year when the US president and Kim traded personal attacks amid apocalyptic rhetoric.

“The whole world saw that progress when the two leaders sat down,” he said.

“We also knew very clearly this was going to be a long and challenging effort.”

Still, several observers say American diplomats believe Kim has no intention of ever giving up his atomic bombs and is leveraging his relationship with Trump for more concessions.

The North Koreans are “confident they can get what they want from another Kim-Trump summit,” noted Daniel Sneider, a lecturer in East Asian Studies at Stanford University. /cbb