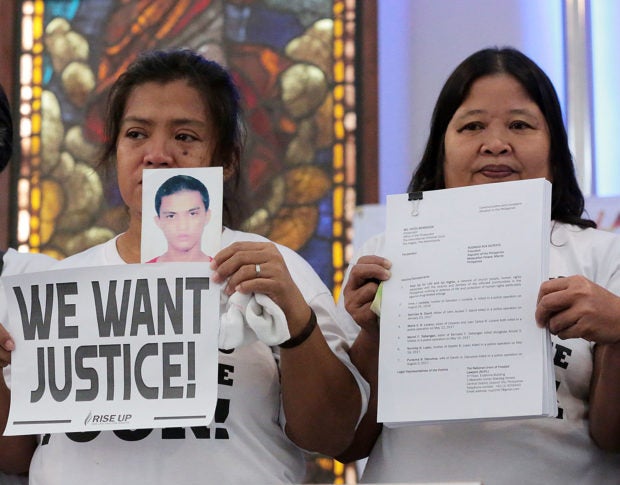 CRY FOR JUSTICE Relatives of victims in the Duterte administration’s bloody war on drugs cry for justice during a media forum on the complaint they filed against the President in the International Criminal Court on Tuesday. —GRIG C. MONTEGRANDE

Activists and families of eight victims of President Duterte’s brutal war on drugs filed a complaint on Tuesday in the International Criminal Court (ICC), a second petition accusing the Philippine leader of murder and crimes against humanity.

But the filing of the complaint—formally referred to as communication—did not bother Malacañang, which said it meant nothing.

“That’s not a complaint. That’s a communication because it’s still to be acted upon by the ICC. Procedure is different,” presidential spokesperson Harry Roque told reporters.

The 50-page complaint calls for Mr. Duterte’s indictment for what it describes as thousands of extrajudicial killings, which include “brazen” executions by police acting with impunity.

Critics of Mr. Duterte’s fierce crackdown on narcotics were being “persecuted,” it said, and cases filed by the victims’ families had gone nowhere.

The ICC petition follows a similar complaint filed in April 2017 by lawyer Jude Josue Sabio, into which the ICC in February started a preliminary examination.

The latest move is led by Rise Up for Life, a network of activists, priests and members of the urban poor communities that have borne the brunt of the war on drugs.

The complaint includes testimony from six relatives of eight people killed by police:

Maria C.B. Lozano, sister of Crisanto and Juan Carlos B. Lozano, both killed in a police operation on May 12, 2017

Mariel F. Sabangan, sister of Bernabe F. Sabangan, killed by police together with Arnold S. Vitales on May 15, 2017

“Duterte is personally liable for ordering state police to undertake mass killings,” Neri Colmenares, a lawyer from the National Union of Peoples’ Lawyers (NUPL) that represents the group, told reporters at a media forum held at the United Churches of Christ Chapel in Quezon City, moments after he said the complaint was filed in the ICC on Tuesday morning.

Mr. Duterte says he has told the police to kill only if their lives were in danger.

In his annual address to a joint session of Congress last month, he said the war on drugs would be as “relentless and chilling” as its first two years.

The Philippine National Police says the more than 4,400 killed over that time were dealers who had all resisted arrest, and denies activists’ allegations of cover-ups and executions of drug users.

Roque said on Tuesday the latest ICC petition was “doomed,” and “would not prosper,” because of the “concept of complementarity.”

The ICC cannot act on the latest petition against Mr. Duterte unless domestic courts were “unable or unwilling to exercise jurisdiction,” he said.

The ICC prosecutor’s office did not immediately respond to a request for comment and could not be reached out of normal office hours.

After ICC chief prosecutor Fatou Bensouda announced the preliminary examination of the first complaint against Mr. Duterte in February, the Philippine leader unilaterally withdrew the Philippines from the Rome Statute, the ICC’s founding treaty, in March, saying the court had not followed due process and presumption of his innocence, in actions that were compounded by “baseless, unprecedented and outrageous attacks” by UN officials.

It was a stark contrast from the previous 18 months, when the former mayor of Davao City had repeatedly dared the ICC to investigate him and expressed his readiness to go on trial in The Hague.

The Supreme Court opened oral arguments later on Tuesday in a separate complaint by some opposition lawmakers challenging the legality of Mr. Duterte’s withdrawal of the Philippines from the Rome Statute, which was done without Senate approval.

Jurist groups say Mr. Duterte is not protected from an indictment, because the ICC’s jurisdiction covers the period of membership, which in the Philippines’ case is from 2011 to March 2019, when the withdrawal takes effect.

In the complaint, the NUPL said the notice of withdrawal was of no moment and did not deprive the ICC of jurisdiction because the communication was filed while the Philippines was a party to the Rome Statute.

The ICC’s taking jurisdiction, the NUPL said, “may force President Duterte to reexamine, if not abandon, his distorted notion of mass murder to solve the country’s drug and crime problem.”

It said ICC intervention could “save thousands more from slaughter.”

The ICC is a court of last resort that can exercise jurisdiction if states are unable or unwilling to investigate crimes.

Senior Supt. Benigno Durana, a spokesperson for the PNP, said on Tuesday that the only order Mr. Duterte gave to police was “to wage war on drugs and criminality within the bounds of the law.” —REPORTS FROM MELVIN GASCON, CHRISTINE O. AVENDAÑO, NESTOR CORRALES