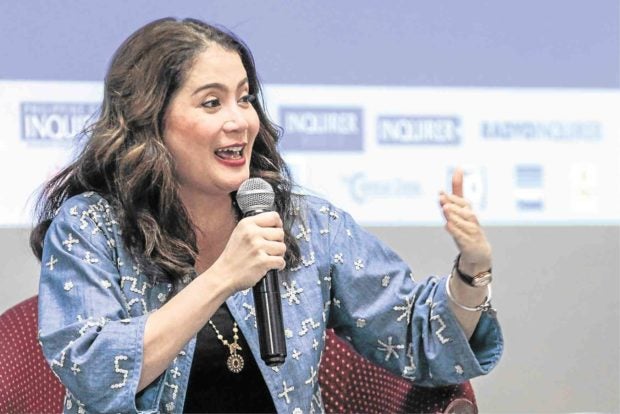 EASY SALE “The Philippines is beautiful. It is very easy to sell,” Tourism Secretary Bernadette Romulo-Puyat says at the Meet Inquirer Multimedia forum on Tuesday. “There’s so much to see, the people are the most hospitable and the food are the best.” —LEO M. SABANGAN II

The Department of Tourism’s slogan “It’s More Fun in the Philippines” is here to stay—well, at least until the end of the current administration.

“Other countries have had their slogans for decades, even if their presidents and tourism secretaries change. We are the only ones who keep on changing it,” Tourism Secretary Bernadette Romulo-Puyat said at the Meet Inquirer Multimedia forum on Tuesday.

“Why change something that works?” she added.

Puyat said her key reason for retaining the catchy slogan was continuity, recalling that even her predecessor, Wanda Teo, adopted it when she assumed the tourism portfolio in the first year of the Duterte administration.

The slogan, which replaced “Wow Philippines,” has been running since 2012.

Besides, Puyat said she did not want to spend more money on a new slogan that “would not please everybody.”

Since the slogan was launched six years ago, an increasing number of tourists have been visiting the country, peaking at a record 6.6 million last year.

This year, tourist arrivals from January to July reached 4.3 million, up by 9.74 percent from the same period last year, despite the closure of famed Boracay Island beginning April.

During Boracay’s six-month shutdown for rehabilitation, tourists are diverted to other destinations, such as Cebu, Bohol, Masbate, Iloilo, Bacolod, Palawan, Siargao, Davao and Camiguin, Puyat said.

“Things are looking brighter for the tourism industry. With the rollout of a comprehensive branding campaign in the coming months and the scheduled reopening of Boracay on Oct. 26, we are optimistic that we will hit, or better yet, surpass our target of 7.4 million [tourist arrivals] for 2018,” she told Inquirer editors, reporters and staff.

The DOT has posted invitations to bid for a P250-million project to develop a marketing communications campaign “refreshing and updating” the “It’s More Fun in the Philippines” brand.

Puyat said she wanted “refreshed” TV commercials that would resonate with millennials and domestic tourists.

Another P250 million will be allocated for media planning and placement focused on priority international source markets such as South Korea, the United States, Canada, Japan, China and Australia.

While South Korea remained the top source of tourists at 937,227 in the first seven months, its growth stagnated at 1.08 percent compared with figures in the same period last year.

Undersecretary Benito Bengzon Jr., DOT spokesperson, said arrivals from China would continue to be strong after the Bureau of Immigration relaxed its visa-upon-arrival policy for Chinese tourists.

For Puyat, the closure of Boracay provided valuable lessons for the country.

“Our tourists, not just foreign but also the local, discovered alternative destinations aside from the beaches; people go to places to eat, to be entertained and to buy things,” she said.

She also cited President Duterte’s decision to close Boracay for other destinations to embrace sustainable tourism—where a tourist visits a place to make a positive impact on the environment, economy and the society.

“This is our chance to make it right, and Boracay will just be a pilot. We will do what we have done in Boracay to all major destinations,” she said.

The country is gearing up to open its doors wider after the Department of Transportation proposed the expansion of airports at Sangley Point, Cavite province, and in Bulacan province.

“The Philippines is beautiful. It is very easy to sell,” Puyat said. “There’s so much to see, the people are the most hospitable and the food are the best.”