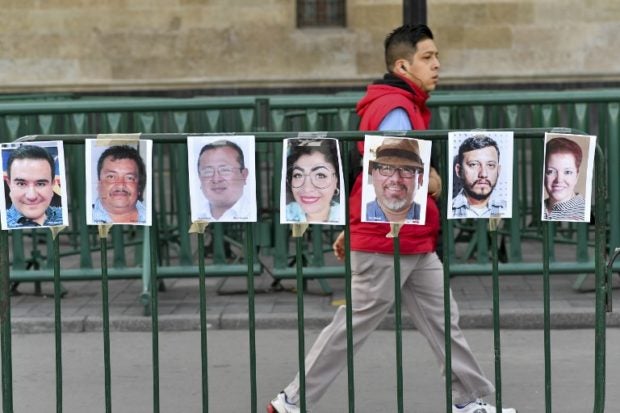 A man walks past pictures of members of the press during a protest against the murder or disappearance of more than 140 journalists and photojournalists in Mexico since 2000, in front of the National Palace in Mexico City on June 1, 2018. AFP PHOTO / Yuri CORTEZ

PARIS – The cost of war reporting and investigative journalism is becoming prohibitive for media outlets, campaigners have warned.

With Internet giants like Google and Facebook soaking up advertising revenue while using the content of traditional media for free, quality journalism has been caught in a double bind, experts say.

At the same time it had become more expensive and dangerous to cover conflict zones, said Jean-Francois Leroy, the head of Visa pour l’Image, one of Europe’s most important photojournalism festivals.

A total of 50 journalists have been killed so far this year, according to RSF (Reporters Without Borders).

As well as setting out to kill reporters, insurgent groups and criminal gangs have also kidnapped them for ransom.

“It has become more and more expensive to cover conflicts like Iraq,” said Leroy. “Security costs have exploded. You need fixers, bodyguards, translators and drivers.

“A few years ago the New York Times estimated that it cost $10,000 (8,600 euros) a day to cover a story in Baghdad,” said Leroy, whose festival in Perpignan in southwestern France next week is covering topics from “Big Food” to the fate of Rohingya Muslims.

‘Fighting for its life’

Investigative journalism has also been squeezed as the mainstream media’s economic model has been crushed by tech giants, said Gerard Ryle, head of the Washington DC-based International Consortium of Investigative Journalists (ICIJ), the body behind the Panama Papers and Paradise Papers revelations.

“Journalism is fighting for its life at the moment,” Ryle told AFP.

“It is dying. The advertising models that sustained reporting, never mind investigative reporting, are broken, and the media has not found a way to replicate them.

“Businesses are cutting back and the first thing that they cut is investigations because they are expensive. Not only are they time-consuming but they are also very risky,” he said.

“You are not always going to get a story and even when you do it can be very expensive to defend legally, you can end up in court fighting” big corporations who don’t want the truth to come out.

With many fewer reporters doing more and more work, scandals are being missed, which is a major worry for democracy, Ryle argued.

“There is huge pressure on younger journalists to produce more and more, what is described as ‘churnalism’, working very quickly turning around press releases and statements and not having the time to check facts or poke around.”

“To that you have to add to the cost of the 300 reporters who were collaborating on the project in 80 countries across the world, which would be millions more.”

Ryle insisted that despite the obstacles investigative journalism was experiencing a renaissance thanks to “a small number of journalists around the world”.

“This is partly because of non-profits like ourselves (supporting reporting) and because of Trump and the fake news era we are in, journalists are more keen to prove what we are doing is worthwhile and essential.

“Journalism is fighting for its life and is trying to make itself relevant and counter all the attacks on it. So in some ways there is better reporting being done now,” he said.

“There is definitely a fight back. Philanthropists are seeing the need to support investigative reporting in order to keep people accountable.

“It is pretty small compared to the old business model but it is certainly growing. People are funding reporting because they see a democratic need for it —  but it is not making up for what was there before.”