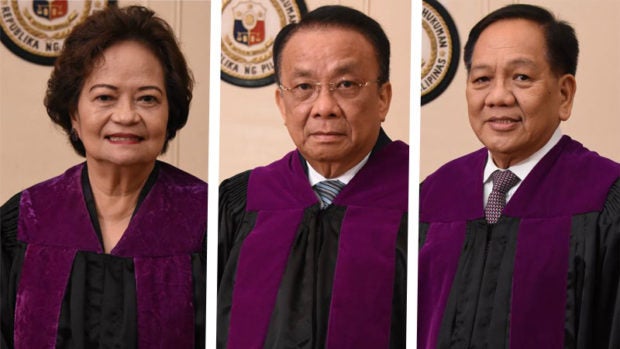 Three senior Associate Justice of the Supreme Court included in the impeachment complaint filed by opposition members in Congress are included in the shortlist of candidates to replace ousted Chief Justice Maria Lourdes Sereno.

Both De Castro and Peralta got six votes while Bersamin got five votes. Currently, there are six JBC members.

The JBC is constitutionally mandated to screen and vet nominees to the President for vacant positions in the Judiciary and top Ombudsman positions.

Justice Secretary Menardo Guevarra said the impeachment complaint against the three chief justice aspirants and four other justices has no effect yet on the nominations.

“It [impeachment complaint] is not yet considered an impeachment case, until is is affirmatively acted upon by the appropriate house committee,” Guevarra, an ex-officio member of the JBC said.

De Castro, Bersamin and Peralta were among the seven justices named in an impeachment complaint filed by opposition members in Congress.

The complaint was filed for voting in favor of the quo warranto petition that ousted Sereno.

Guevarra said Reyes got three votes which is “not enough to land him in the shortlist.”

On the other hand, Guevarra said Tehano-Ang has been disqualified “because of an adverse finding and recommendation in her administrative case.”

The names will be submitted to President Rodrigo Duterte.  /muf