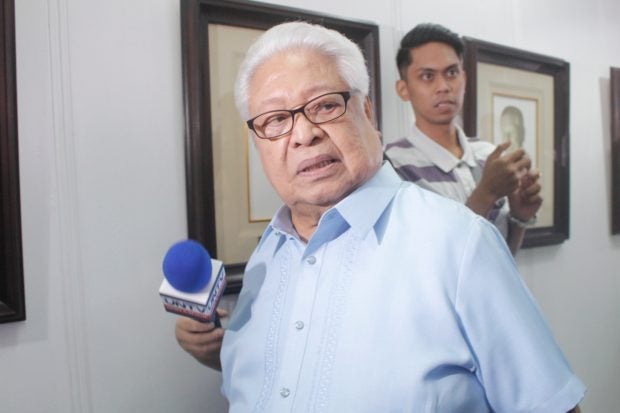 Opposition lawmakers on Thursday filed separate impeachment complaints in the House of Representatives against seven of the eight Supreme Court justices who kicked out Chief Justice Maria Lourdes Sereno, accusing them of flouting the 1987 Constitution by granting Solicitor General Jose Calida’s quo warranto petition against her.

“If we don’t file this complaint, we would be condoning a blatant violation of our Constitution by a slim majority of Supreme Court justices,” Albay Rep. Edcel Lagman told a press briefing.

De Castro, Peralta, Bersamin, Tijam and Jardeleza had testified against Sereno in the impeachment hearings conducted by the House justice committee.

The hearings were suspended when Calida launched his own legal action to unseat Sereno.

Interestingly, it was Peralta, touted to be an early favorite to succeed Sereno, who first broached the idea that she could be removed from office through a quo warranto petition.

Voting 8-6, the justices altered the country’s judicial landscape on May 11 when they ruled that constitutional officials may be removed from office outside of the impeachment process prescribed by the Constitution.

Lagman, one of the four lawmakers who brought the impeachment complaints, said the legislators opted not to include former Associate Justice Samuel Martires because he was appointed Ombudsman on July 26.

Despite the odds, Lagman and the other complainants said it was their duty to hold the justices accountable before the House.

The 292-member legislative body is controlled by Mr. Duterte’s allies.

De Castro, Peralta and Bersamin, three of the most senior justices, were all appointees of former President Gloria Macapagal-Arroyo, who is now the Speaker of the House.

“The filing of [the] impeachment complaint… is not an act of political retribution, but of devotion to the Constitution as the highest law of the land,” Lagman said.

Alejano said the House Office of the Secretary General must refer the complaints to Arroyo’s office and for the House leadership to act on them even if the President openly supported the campaign for Sereno’s ouster.

He said that under the rules,  the Speaker should take action within 10 days and submit the complaints to the House committee on rules.

“It is very tempting to be frustrated and become hopeless,” Alejano said. “But this is the legal way to make them accountable for their wrongdoings. Impeachable officers must be held accountable.”

Villarin reiterated that “supreme standards must govern the Supreme Court.”

“The Constitution clearly provides [that] a Chief Justice can be removed only by impeachment, not by any other way amounting to a mutiny that draws from petty squabbles, personal grudges and frustrated ambitions,” the Akbayan representative said.

According to Baguilat, the complainants were expecting that even lawmakers from the majority would endorse their complaints against the seven justices.

“Many of our colleagues did not agree with how Sereno was removed as Chief Justice. They want the constitutional process to be followed,” he said.

Lagman said the Judicial and Bar Council (JBC), the constitutional body tasked to screen applicants for judicial posts, should take cognizance of the allegations against the candidates for the country’s highest judicial office.

The filing of the complaint, he added, would “frustrate” their application as an impeachment complaint was “akin to or even more serious than an administrative case whose pendency disqualifies applicants for positions in the judiciary under the revised rules of the JBC.”

“The four aspirants don’t have an independent attitude or character,” Lagman said.

“If the JBC will not comply with its mandate to vet very well the qualifications of the candidates, then there’s something wrong,” he added. “That is an indication that the JBC is not really independent.”

Justice Secretary Menardo Guevarra, however, said the impeachment complaint would have no bearing on the JBC’s choosing nominees for Chief Justice on Friday.

“In my opinion, the mere filing of an impeachment complaint will not have any effect on the nomination of the four Supreme Court justices for the Chief Justice position,” Guevarra told reporters.

The Supreme Court did not comment on the filing of impeachment complaints against the seven justices.

In their complaints, the lawmakers said the justices should be booted out for culpable violation of the Constitution and betrayal of public trust for issuing a ruling that was “not only errant, it is also malevolent.”

“It is not only bereft of constitutional anchorage, it is also a blatant subterfuge, an orchestrated charade,” they said.

“Unethical ulterior motives induced Justices De Castro, Peralta and Bersamin to oust Sereno. With the removal of Sereno, a vacancy was created in the position of Chief Justice. These justices were expected to vie for [the] position as in fact they are,” they said. —WITH A REPORT FROM DONA Z. PAZZIBUGAN