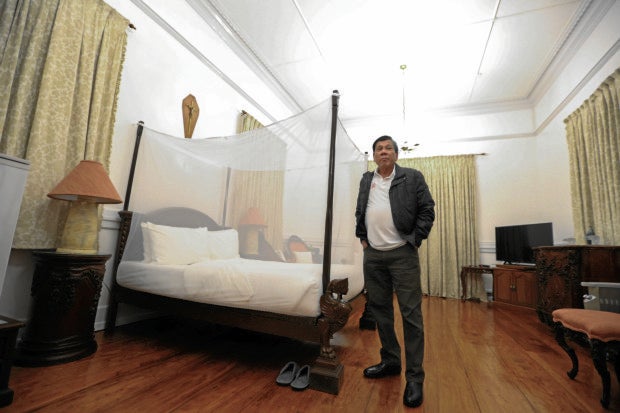 President Duterte poses beside the presidential bed at the Mansion, complete with mosquito net. MALACAÑANG PHOTO

President Rodrigo Duterte’s trusted aide on Monday disputed rumors that the chief executive is in a state of coma.

Go issued the statement after Communist Party of the Philippines Jose Maria Sison shared in his Facebook account that Duterte has gone into coma, citing “the latest report,” which he did not identify and elaborate.

Go said Sison must be dreaming.

(Maybe Joma was just dreaming and he put C in Joma instead of his name. It was just him after all.)

In a Palace briefing, Presidential Spokesperson Harry Roque also refuted the speculations that Duterte was ill.

“Contrary to what Joma Sison said, the President is fine and well in Davao, participating in Kadayawan,” he said.

“As usual, Joma Sison does not know what he talks about. How would he know about the state of health of the President when he is in far away The Hague Netherlands — not The Hague but I think another city in the Netherlands,” he added.

The President, he said, would have a public appearance on Tuesday with the League of Cities in Cebu City.

In a Facebook post, Sison also said that people who saw Duterte during the national convention the San Beda Law fraternity Lex Talionis Fraternitas in Davao City “reported that the darkness of his face had become aggravated from its appearance the other day and that his walk and handshake had become more unstable.”

“There was a rumor that he fell ill during his Lex Talionis affair. I talked to former secretary [Vitaliano] Aguirre who was in the affair, he was fine, he stayed till 12 [midnight],” he said.

Roque dismissed the “darkness” on the President’s face.

“I don’t know maybe he’s not wearing powder. Normally, the President wears powder, maybe there was just a photo taken of him without powder. So I don’t see anything extraordinarily different from the color of the President’s face,” he said.

He the President “was in very high spirits” and “he enjoyed the company of his brods in the Lex Talionis.”

The Palace official said the public should not listen to Sison, whom he described as “a  spent revolutionary not a doctor.”

“Well, Joma Sison is a spent revolutionary, not a doctor; let’s not listen to him as far as medical condition is concerned,” he said.

“So I don’t see any reason why people — I don’t even understand why Joma Sison said he was in coma. He’s in far away Netherlands, how would he know?” he added.

Speculations that Duterte was ill resurfaced after he visited the Cardinal Santos Medical Center in San Juan City on Sunday, the eve of his third State of the Nation Address (Sona).

“[T]he President already said that he was given a clean bill of health so that’s actually making public the results of his medical test,” he said.

He advised critics of the President “to stop wishing him ill as far as his health is concerned.”

(Because every time you wish him ill, he becomes stronger. He’s as strong as a horse, so please.)

Roque said there was no need to release the medical records of the President.

“So every time he appears in public, we’re debunking reports that he’s in coma. So why do you need a document to show that he is [in] perfectly good health. When people have said that he’s in coma and yet he’ll be around. So tomorrow he will be there and that’s a proof that he is not in coma,” he said. /cbb, je