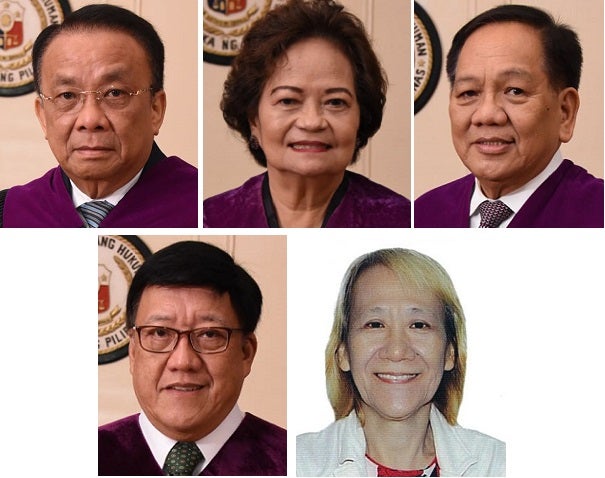 The Judicial and Bar Council (JBC) will interview today, Thursday, the five individuals aspiring to be the next Chief Justice.

The post of the Chief Justice became vacant after Maria Lourdes Sereno was ousted via quo warranto proceedings that declared her unqualified for the position for failure to comply with the requirements set by the JBC, specifically the submission of a complete statement of assets, liabilities and net worth (SALN).

Based on the Supreme Court’s advisory, the interview will be done in alphabetical order with Bersamin first and Tehano-Ang as the last candidate.

Three applicants – De Castro, Peralta, Bersamin – are among the five most senior justices of the Supreme Court. By tradition, they are automatically nominated and will be considered a candidate once they submit their letter of acceptance.

The three accepted their automatic nomination, making them official candidates for the post.

Carpio will be the acting chair of the JBC, while Velasco retired last August 8.

Reyes, who accepted the nomination for chief justice after being endorsed by former JBC member and retired Sandiganbayan Justice Raul Victorino, will also be interviewed by JBC. He is one of the most junior Supreme Court justices.

The Supreme Court preferred to follow the “seniority rule” after 10 justices voted for Bersamin to replace Sereno followed by De Castro and Peralta with nine votes each while Reyes received two votes.

De Castro, Bersamin and Peralta were among the six justices whom Sereno asked to inhibit from her quo warranto case filed by Solicitor General Jose Calida. The petition was eventually granted by the Court in a decision issued last May 11 and became final on June 19.

The three justices were all appointed by former president Gloria Macapagal Arroyo while Reyes was President Rodrigo Duterte’s second appointee. Duterte’s first appointee to the Supreme Court, Samuel Martires, is now the Ombudsman.

Bersamin, who was first to submit his letter of acceptance, was a Court of Appeals associate justice. He also served as presiding justice of the Quezon City Regional Trial Court Branch 96.

He chaired the 2017 Bar examinations and was an examiner for Remedial Law in 2008. He received numerous awards including the Chief Justice Jose Abad Santos for Judicial excellence in 2002, Best Decision Award in both Civil and Criminal Laws in 2000. He ranked 9th in the 1973 Bar examinations.

He will reach the mandatory retirement age of 70 in October 2019.

De Castro, the third most senior magistrate of the high court, rose from the ranks starting her career as a law clerk from the Supreme Court. She then moved to the Department of Justice (DOJ) as a state counsel. She was appointed Sandiganbayan justice and eventually became its presiding justice. She presided over the division that convicted former-President-now-Manila Mayor Joseph Estrada of plunder.

De Castro is set to retire this October.

Peralta once served as a presiding judge in Quezon City. He was known as a “hanging judge” for strictly imposing the death penalty.

Then, he was appointed as a Sandiganbayan associate justice and was part of De Castro’s division that convicted Estrada.

He was appointed to the Supreme Court in 2009.

He penned the ruling allowing the burial of the late president Ferdinand Marcos at the Libingan ng mga Bayani. He will retire in March 2022.

Reyes, a former CA presiding justice, was appointed by President Rodrigo Duterte to the SC in July 2017. He penned a ruling declaring as unconstitutional then justice secretary Leila de Lima’s Department Order No. 41, which authorizes the Secretary of Justice to issue hold departure orders, watchlist orders, or allow departure orders.

The circular was used as basis for imposing a travel ban against Arroyo and her husband Jose Miguel Arroyo, pending the resolution of the plunder and electoral sabotage charges filed against them.

Tejano-Ang, 65, who graduated in Ateneo de Davao, LLB or Bachelor of Laws, was nominated for Judicial Excellence last 2013.

After the interview, Justice Secretary Menardo Guevarra, an ex-officio member of the JBC said they would hold their final deliberation and selection on Aug. 31.

The shortlist will then be submitted to the President who has 90 days from June 29 to make his choice. June 29 was the date the quo warranto against Sereno became final; thus, officially making the chief justice post vacant.

The JBC is constitutionally mandated to screen and vet nominees to the President for vacant positions in the Judiciary and the Ombudsman. /cbb