Tapped for drug war, most of Caloocan policemen linked to August 2017 killing of 3 teens back on active duty
By: Krixia Subingsubing - Reporter / @KrixiasINQ
Philippine Daily Inquirer / 06:15 AM August 16, 2018 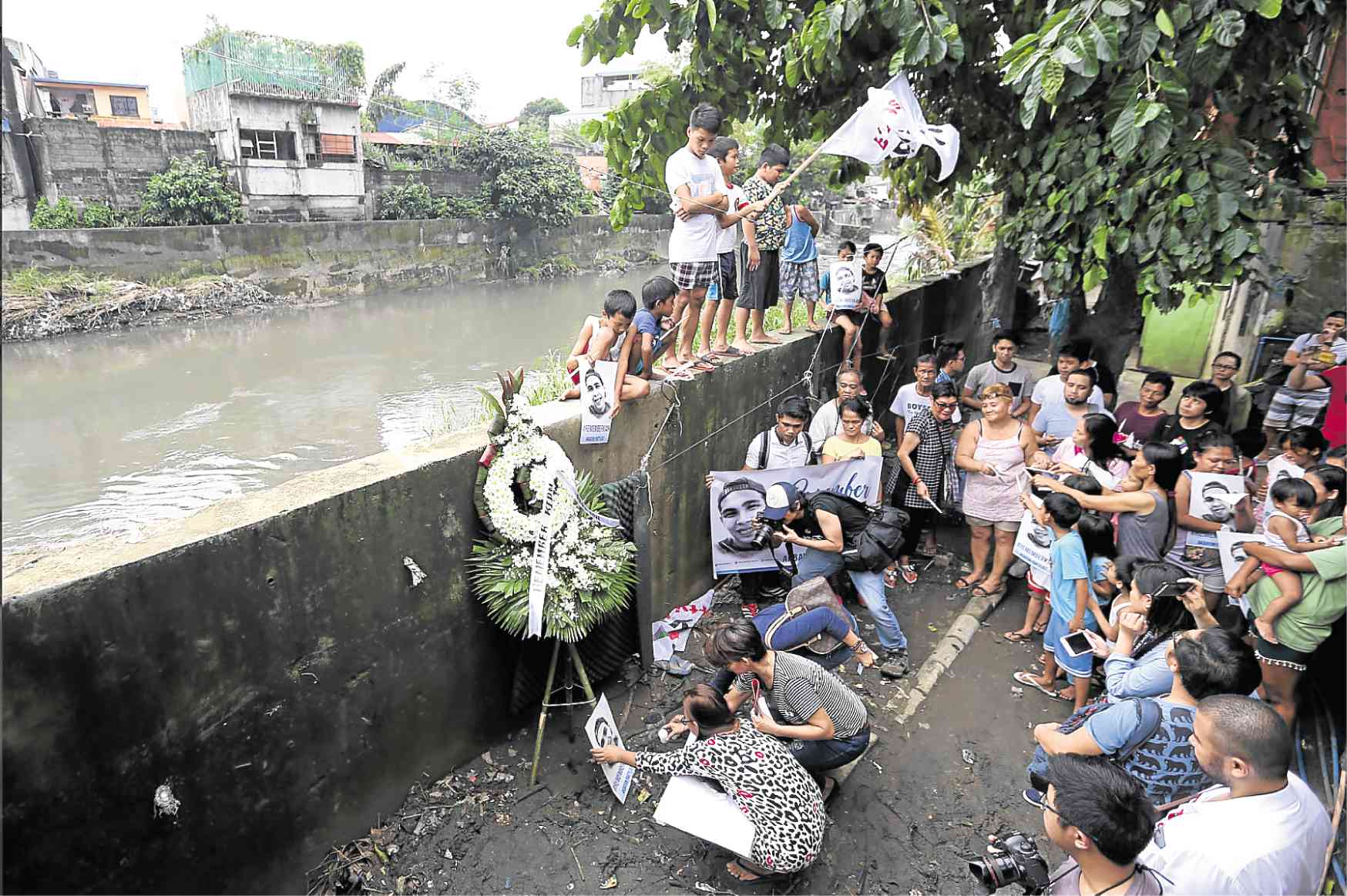 ONE YEAR LATER Residents of Libis Baesa, Barangay 160, Caloocan City, gather to say prayers on Wednesday at the spot where the police shot Kian delos Santos dead exactly a year ago.

As President Rodrigo Duterte’s campaign against illegal drugs peaked in August last year, the names of three teenagers stood out in the growing death toll: Kian delos Santos, 17, and Carl Arnaiz, 19, were killed a day apart in “shootouts” with the Caloocan police, while Reynaldo “Kulot” de Guzman, 14, Arnaiz’s last known companion, turned up days later in a creek in Nueva Ecija, his head wrapped in packaging tape and his body bearing more than 20 stab wounds.

As the killings sparked fresh outrage over alleged police abuses committed in pursuit of the President’s war on drugs, they also led to the sacking — or “self-cleansing,” as Philippine National Police (PNP) Director General Oscar Albayalde put it — of practically the entire Caloocan police.

A year later, however, most of the officers involved in the operations that killed Delos Santos and Arnaiz, and were also being linked to the De Guzman’s gruesome death, have returned to active duty, the Inquirer learned.

Four of their superiors, cleared of command responsibility, have since been moved to higher positions.

Only five officers have been jailed and indicted in connection with the three deaths.

Meanwhile, the victims’ families and three prosecution witnesses remain under the Department of Justice’s witness protection program (WPP), their lives upended and isolated from the world.

Police said the Grade 12 pupil was carrying “shabu” and engaged them in a gun battle — a claim contradicted not only by eyewitness accounts but also by security camera footage and forensic examination results.

Cerillo, Bersaluna and Fajardo insisted during a Senate inquiry that Kian was a pistol-packing drug courier — and that they based their information on the teenager from what they had gathered on “social media.” 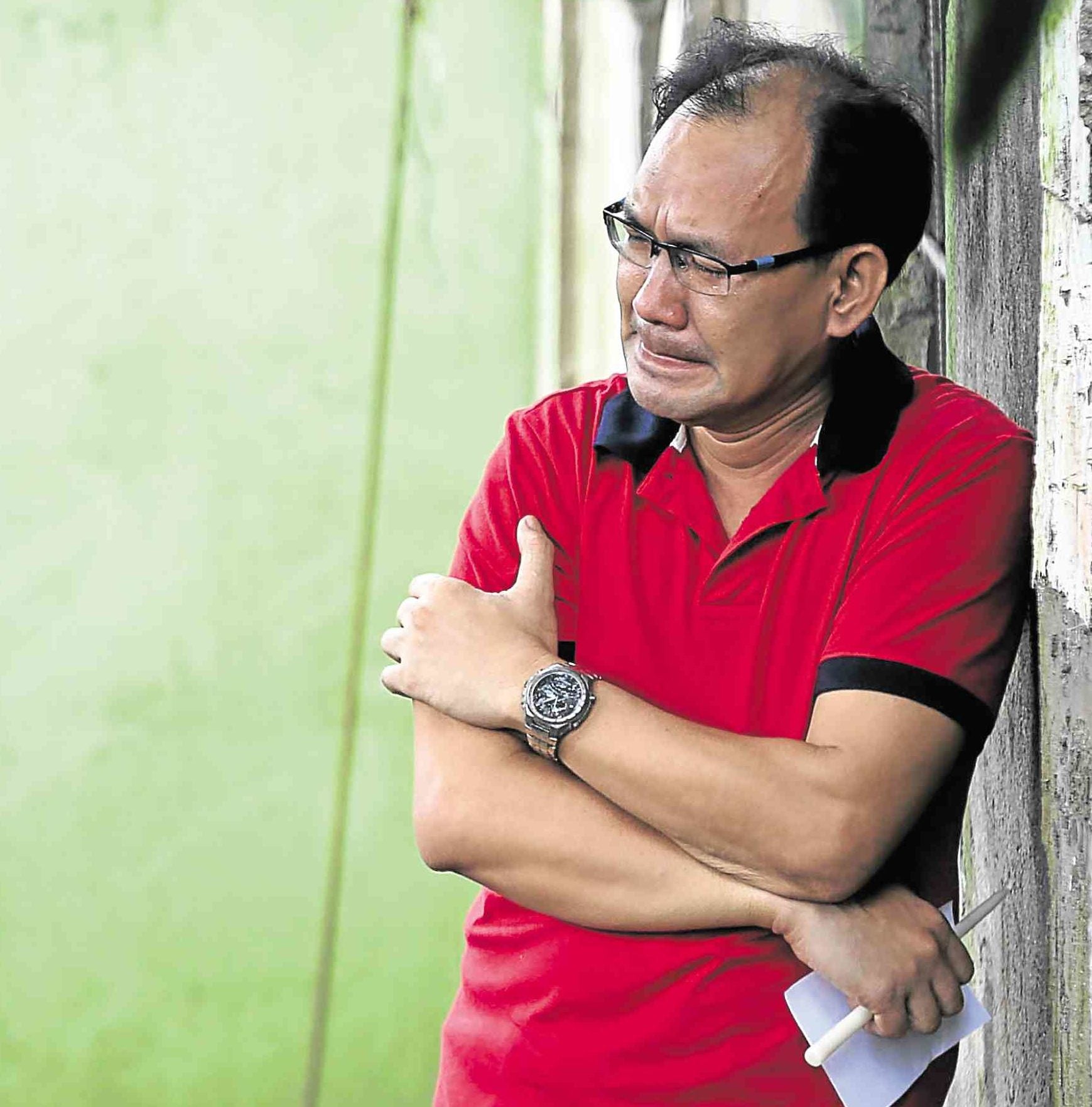 They were later cleared of liability and were even promoted.

Since May, Cerillo has been the officer in charge of the NPD operations office.

Of the 15 men involved in the Aug. 16 operation, only PO3 Arnel Oares (the team leader), PO1 Jerwin Cruz and PO1 Jeremias Pereda, as well as their civilian asset Renato Loveras, were indicted.

The other 12 have been reassigned to different units in Metro Manila, seven of them under the NPD.

In the Arnaiz case, the police alleged that Carl robbed taxi driver Tomas Bagcal near the boundary of Caloocan and Navotas on Aug. 17, and that the teenager was shot dead by two responding officers, PO1 Ricky Arquilita and Jefrey Perez, for resisting arrest.

Like their colleagues tagged in the Delos Santos killing, Arquilita and Perez were indicted for murder, torture and frameup.

The PNP Internal Affairs Services (IAS) found their superior, Chief Insp. Fortunato Ecle, culpable of grave neglect and recommended a one-rank demotion, but Ecle has retained his rank and currently serves as officer in charge of the NPD logistics office.

PO3 King Bautista, the investigating officer who took Bagcal’s statements on the alleged robbery — affidavits that later proved riddled with inconsistencies — is back in the Caloocan police.

Administrative complaints against Cerillo, Ecle, and the 15 men are pending in the PNP-IAS and the Office of the Ombudsman.

So far, only Oares had taken the witness stand in Kian’s case which is being heard at Caloocan Regional Trial Court Branch 125, where Judge Rodolfo Azucena Jr. recently denied the defense panel’s bid to file for a demurrer of evidence.

Oares admitted he was the one who shot the Grade 12 student, but said he was only forced to do so because Kian fired at him first. His two coaccused are expected to back his claim.

In the Arnaiz-De Guzman case, the murder trial that started in Caloocan RTC Branch 122 was moved to a Navotas court in May when a witness testified that the two teens were actually shot on the Navotas side of the boundary.

However, the torture and frameup charges are still being heard at Caloocan RTC Branch 122, where the prosecution is expected to rest its case, according to Senior Assistant State Prosecutor Xerxes Garcia.

The hearings had to be reset after Judge Georgina Hidalgo was promoted to the Sandiganbayan in June.

In an interview, Kian’s mother, Lorenza, said she thought there would “no longer be another Kian” after her son’s high-profile case drew widespread condemnation.

Her family’s only connection to the outside world these days, Lorenza said, had been their attendance at the trial — an emotional ordeal in itself.

They would always find themselves just a few seats away from the officers responsible for Kian’s death.

“These policemen think we have ruined their lives,” added Kian’s uncle Randy, who’s family was not placed under the WPP but still had to live their daily lives with extreme caution, wary of threats. “They’re wrong; they ruined ours. Life will never be normal for us again.”