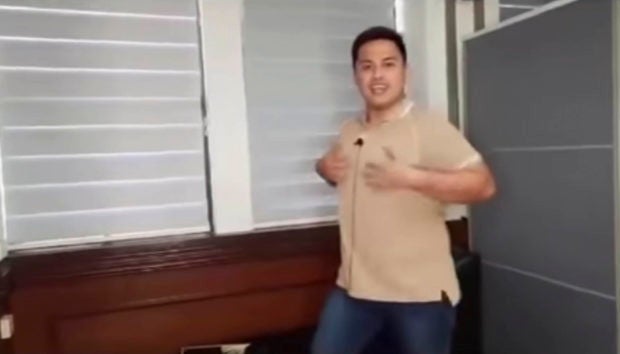 VIDEO DANCE Drew Olivar, cohost of Uson in the “Good News Game Show,” performs his dance choreography on federalism in this screengrab of Uson’s video.

Days after describing Mocha Uson’s inclusion in the federalism campaign as a “beautiful decision” and a “brilliant idea,” Sen. Aquilino Pimentel III on Monday found himself eating crow, as a “filthy” video made by the sexy-dancer-turned-Duterte-administration-official supposedly promoting the proposed change in the form of government burned like wildfire on the internet.

“I was wrong. I thought Mocha would help in explaining the concept of federalism,” Pimentel said, taking back his own impression of the controversial assistant secretary at the Presidential Communications Operations Office (PCOO).

“Little did I know that they would only befoul the cause of federalism,” said Pimentel, president of the ruling Partido Demokratiko Pilipino-Lakas ng Bayan (PDP-Laban), one of the original proponents of a shift to federalism.

The former Senate President said Uson should stay away from the federalism campaign and take a leave of absence to “study first.”

Pimentel’s father, Aquilino Pimentel Jr., also a former Senate President and now a member of Malacañang’s consultative committee that drafted a proposed federal Constitution, said he did not care whom the government wanted to put on the promotional team, but insisted that the promoters should know the subject.

“This is a democracy, so it’s all right. But I repeat: For me, it’s important that she disseminates correct information and that she knows what she is talking about,” said the elder Pimentel.

“Pepe” and “dede” are vernacular terms for “vagina” and “breasts.”

Uson is seen in the video laughing and encouraging Olivar.

The video was done in utter bad taste, according to scandalized social media users who first saw the video and began circulating it on Twitter and Facebook on Sunday.

Before the clip went viral, Senator Pimentel was one of the few officials who defended Uson’s participation in the information campaign on which the government planned to spend P90 million.

On Friday, he said: “Who am I to question such beautiful decision? Team will be led by members of the consultative committee. [It’s a] brilliant decision.”

By Monday, he had changed his tune.

He was not angry, he said, just disappointed that the “best and the brightest appointed to this government can come up with only that kind of bullshit.”

Other senators were not amused by the clip.

“It is a desperate attempt to attract attention by intentionally offending our sense of propriety,” Sen. Francis Escudero said.

Escudero added: “It is downright vulgar and has no place in the public discourse on such an important issue as the proposed shift to federalism and Charter change.”

Senate President Vicente Sotto III said the video was clearly “just a joke,” but “theatrical techniques will not work to explain a very serious issue such as federalism.”

“It’s better for the PCOO to restrict their speakers on federalism to those who can explain it academically,” Sotto said.

Opposition Sen. Francis Pangilinan expressed disgust, saying such “filth” and lewdness” had no place in government.

“Secretary [Martin] Andanar should explain the lewdness and filth that is happening in his office using the funding, time and effort of the government,” Pangilinan said.

Sen. Ralph Recto had a sarcastic take on the controversy.

“She’s the perfect endorser for federalism. She symbolizes those in favor of federalism,” Recto said, referring to Uson.

Sen. Panfilo Lacson suggested that Uson might have sealed the fate of the effort to revise the 1987 Constitution for a shift to federalism.

“Without Mocha Uson, federalism is already dead and awaiting cremation at the Senate. With Mocha Uson, the ashes should be thrown far, far away from the Philippines’ 7,107 beautiful islands,” Lacson said on Twitter.

Sen. Nancy Binay, who earlier suggested that Uson should “educate” senators about the merits of federalism, said she was saddened by what she had seen in the video.

“It’s saddening that the seriousness of the discourse has been downgraded to the lowest of forms,” she added.

Opposition lawmakers in the House of Representatives were not aroused by Uson’s video.

Caloocan City Rep. Edgar Erice said the controversy was “good for our country [because] it exposes the weakness of the proposal and I would say [Charter change] is dead.”

“It shows that even the officials of Malacañang [do not] know anything about federalism that they resort to cheap gimmickry,” Erice said. “Thanks to [Assistant Secretary] Mocha.”

Ifugao Rep. Teddy Baguilat Jr. said: “They did not stop to think that this is a very important discussion and they are dirtying the explanation.”

Baguilat wanted to know if Uson used government funds for the production of the video.

“The more important question is if the people’s money have been spent on this… They allocated funds for a defective campaign. This is corruption if that’s the case,” he said.

Of the P90 million that Malacañang plans to spend on the federalism campaign, P10 million will go to the PCOO, the Palace said last week.

Administration allies in the House were not aroused by Uson’s video either.

Ako Bicol Rep. Rodel Batocabe said: “It is a campaign that, instead of achieving its purpose, produced a different interpretation and highlighted nothing but private body parts.”

Surigao del Sur Rep. Johnny Pimentel said the PCOO should look for other ways to disseminate information about federalism.

“It’s not the right way to inform the people about federalism. They must find another way to disseminate information about federalism that is more appropriate so that the Filipino people will take the plan to amend the Constitution seriously,” Pimentel said.

Malacañang plans to proceed with a “federalism road show” despite the scandal and Lacson’s declaration that the push for the amendment of the Constitution was ready for cremation in the Senate.

“We are confident that once we are able to explain to the senators the merits of Charter change and federalism, we will get the required support. But as I have mentioned earlier, we will do this by appealing to reason and highlighting the merits of federalism,” Roque said.

He said the campaign would start this month.