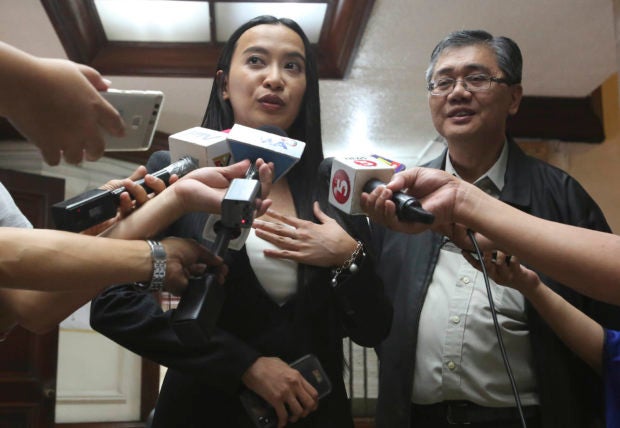 FEDERALISM PITCH Mocha Uson, assistant secretary for presidential communications, talks about how to increase public awareness of federalism in Malacañang on Friday. With her is Conrado Generoso, spokesperson for the consultative committee that drafted the proposed federal Constitution. —JOAN BONDOC

Assistant Secretary for Presidential Communications Mocha Uson on Sunday said her controversial video on federalism had been shot before she talked with the consultative committee that was tasked to draft a new Constitution.

Uson took to social media on Sunday night to deflect criticism that the video of herself and her “Good News Game Show” cohost Drew Olivar was in utter bad taste.

Uson uploaded a one-minute video on her Facebook page to present her side of the controversy.

“This is a clarification on the viral video in which Drew Olivar performed his dance choreography on federalism,” she said.

Uson claimed that the video was shot even before she met with the consultative committee on Friday.

“Even before I was formally approached by the consultative committee and the communications group of the Department of the Interior and Local Government (DILG), we already shot this video and we’ve been doing this online game show for a long time,” she said.

She stressed that the production of the video did not cost anything and that Olivar was not paid for his performance.

Uson also denied that she was a spokesperson for the information drive on federalism, saying she only wanted to help in the promotion of federalism.

“I am not an ambassadress of federalism. I am only one of those helping in promoting federalism on social media,” she said.

In another Facebook post, Uson said the video was not promotion for federalism but “a game show.”

Uson’s boss at the Presidential Communications Operations Office (PCOO), Press Secretary Martin Andanar, also said she was not a spokesperson for the information campaign.

Andanar said even Executive Secretary Salvador Medialdea was not pleased about Uson’s being pictured as a spokesperson for the campaign when no spokesperson had been designated for the information drive.

“Medialdea stressed that we need spokespersons, talking heads who are experts on federalism, like members of the consultative committee and so much more,” Andanar said on Monday.

He said Medialdea had a “bad trip” when they talked because there had been “no official announcement that there were spokespersons.”

Andanar said it was the interagency task force, particularly the DILG, that would designate spokespersons for the information campaign.

He said he confronted Conrado Generoso, the spokesperson for the consultative committee, and “told him that he should disengage from this since he did not seek the PCOO’s permission.”

Andanar said Generoso “directly talked to Uson without informing the interagency task force and me as head of PCOO.”

He said he had communicated to Uson about the controversy but she had yet to reply.

Generoso issued a statement denying he designated Uson as spokesperson for the federalism campaign.

“It is certainly not the way to present federalism,” Generoso said in a statement, distancing himself from the video that lawmakers had condemned as “filthy,” “downright vulgar,” and “downgrading” the federalism discourse to “the lowest of forms.”

Generoso said there had never been an idea in the consultative committee to designate Uson as spokesperson for the federalism campaign.

“All that I said before was that in view of Ms Uson’s reach [on] social media and her being part of the PCOO, she should perhaps write something about federalism in her column and blog or interview some people about federalism, which can help in raising public awareness about federalism,” he said.

Generoso said the planned information campaign should discuss the benefits of a federal structure of government to ordinary citizens in far-flung provinces that were disadvantaged by the concentration of power and resources in Manila.