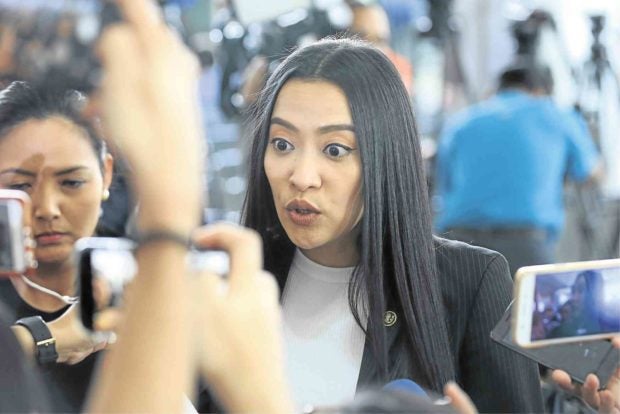 Villarin said in message to reporters that if “this is where our taxes go, perhaps it’s time to remove its budget and use it for what our people truly need.” He then added the hashtag #ZeroBudgetPCOO.

The opposition lawmaker said a presidential office is “not a comedy bar.”

Uson, he added, should “better remember that she is already a public official who must perform, not lewd acts of comic material, but her duties to the Filipino people with integrity and respect.”

“A defective product cannot be sold by an equally defective seller. She fails not only in making Duterte’s chacha any more palatable for Filipinos, but also in engaging Filipinos into the real issues surrounding Cha-cha (Charter change),” Villarin said as he also noted that this was not the first time the PCOO “has made a fool of itself.”

Villarin said “simple errors in spelling or grammar are indicators of the huge error in appointing officials who are not up for the task of informing our people accurately, sufficiently, and responsibly.”

READ: Cha-cha is dead, thanks to Mocha — Rep. Erice

The lyrics of the jingle, performed by a certain Drew Olivar in the video blog, include the line: “I-pepe, i-pepe, i-dede, i-dede, pepe pepe pederalismo!” The jingle was part of a video blog posted on Uson’s Facebook page “MOCHA USON BLOG” last Thursday.

Gabriela Rep. Arlene Brosas meanwhile slammed the “disgusting” video as a “vulgar degradation of women for a questionable political end.”

“It is deplorable that Uson is using her position and influence to spread and reinforce the macho and patriarchal view that women’s bodies are mere objects that can be toyed for amusement, in this case, for a perverted information drive on federalism which majority of Filipinos object,”

But Uson defended her “Pepedederalismo” jingle video with Olivar, saying it was meant to get Filipinos to talk about federalism.

But instead of defending the video despite the huge backlash, Brosas said Uso “should delete the video, apologize and act in accordance with Code and Ethical Standards for public officials and employees and the Magna Carta of Women.”

Magdalo Rep. Gary Alejano for his part said this issue “reflects how low” the government looks at the issues of Cha-cha and federalism.

Ding Generoso, spokesman of President Rodrigo Duterte’s Consultative Committee (Con-com), said the jingle was not part of their information drive for federalism. /je

Koko to Mocha: Keep off federalism campaign, take a leave