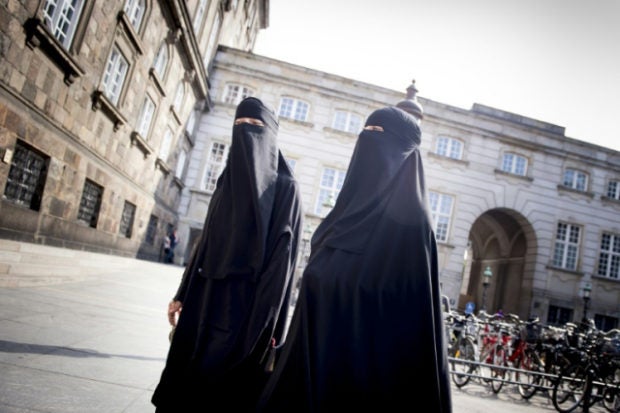 A 28-year-old woman wearing a niqab on Friday became the first person in Denmark to be fined for violating a new controversial law banning full-face Islamic veils in public places, media reported.

Police were called to a shopping centre in Horsholm, in the northeastern region of Nordsjaelland, where the woman had become involved in a scuffle with another woman who had tried to tear her niqab off, police duty officer David Borchersen told the Ritzau news agency.

“During the fight her niqab came off, but by the time we arrived she had put it back on again,” Borchersen said.

Police took a photograph of the woman wearing the niqab, and obtained security camera footage from the shopping centre of the incident.

The woman was informed she would receive a fine of 1,000 kroner ($156 or almost P8,300) in the post, and was told to either remove her veil or leave the public space.

“She chose the latter,” Borchersen said.

As of August 1, wearing a burqa, which covers a person’s entire face, or the niqab, which only shows the eyes, in public carries a fine of 1,000 kroner.

Repeated violations are fined up to 10,000 kroner.

The ban also targets other accessories that hide the face such as balaclavas, masks and false beards.

Human rights campaigners have slammed the ban as a violation of women’s rights, while supporters argue it enables better integration of Muslim immigrants into Danish society.

The full-face veil is a hot-button issue across Europe.