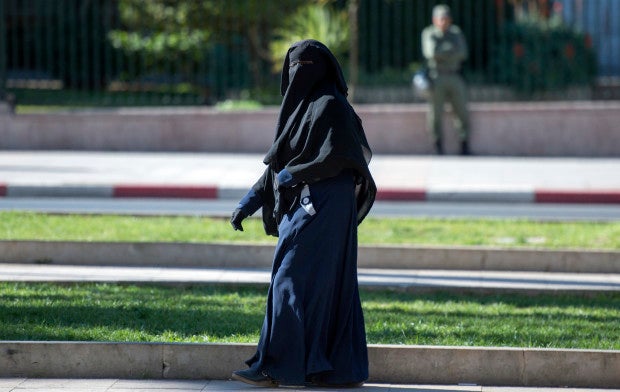 A woman wearing a niqab walks along a street in Rabat on January 15, 2017. Morocco’s ban on the sale and production of burqa full-face Muslim veils beloved of Salafists has sharply divided opinions in the North African country. AFP

PARIS, France — Germany on Thursday followed several other European countries which have  banned, totally or partially, the full Islamic veil. The state of play across the continent:

German deputies voted Thursday on a partial ban on “covering the face”. The text does not specifically mention the full Islamic veil but was clearly drawn with the burqa in mind.

Chancellor Angela Merkel in December 2016 said “the full veil must be banned wherever it is legally possible.”

According to the legislation, civil servants and officials, including judges and soldiers, must have their faces uncovered.

The law, which must also go for approval by the upper house of parliament, also says people can also be required to remove facial coverings in order to match them with their identity papers.

The first European country to ban the full-face veil in public spaces with a law that took effect in April 2011.

The law has resulted in around 1,600 arrests since it came into force, and violations can result in fines of up to 150 euros.

Austria’s chancellor Christian Kern said in January he will seek to ban full-face veils in public.

The wearing of the full veil is governed by a June 1, 2011 law prohibiting “appearing in places accessible to the public with a face masked or hidden, in whole or in part, in such a way as to be unidentifiable”. Violations can result in fines and/or up to seven days in jail.

There is no law restricting the wearing of garments for religious reasons. However in March 2007, the education ministry published directives allowing directors of public establishments and denominational schools to ban the niqab veil.

In September, 2016, Bulgarian lawmakers approved a law that bans wearing in public clothing that partially or completely covers the face, with exceptions for health or professional reasons.

A 1975 law aimed at protecting public order makes it illegal to cover one’s face in public places, but courts have systematically thrown out local moves to use the ban to outlaw the the full-face veil.

Two regions held by the anti-immigrant Northern League, Lombardy and Venetia, have banned the burqa and full face veil in hospitals and public places.

Legislation passed by the lower house in November 2016 and currently being examined by the Senate would ban the wearing of burqas, helmets and face masks on public transport as well as schools, hospitals, and government buildings. Violations would result in a fine of up to 405 euros.

The government said in October, 2016 it was seeking regulations prohibiting the full-face veil in schools and universities.

Scandinavian neighbours Denmark and Sweden have allowed schools, administrations and companies to decide the issue for themselves, while there is no ban in Finland.

Switzerland’s upper house earlier this year voted against a draft bill on a nationwide burqa ban.

In the southern Ticino region however, the burqa has been forbidden since July 1, 2016 and violators face a minimum fine of 100 Swiss francs ($95). A group of private individuals is currently seeking signatures to force a national referendum on the issue.

Three other countries that have not banned the burqa are among those closest to the Middle East or North Africa; Greece, Portugal and Spain.