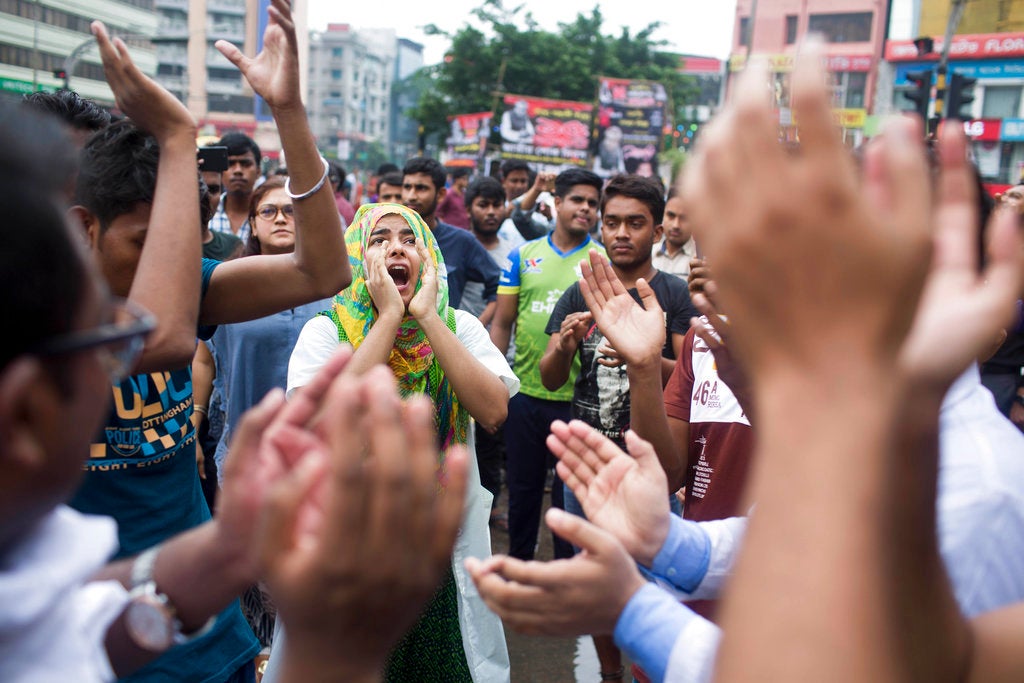 Bangladeshi students shout slogans as they block a road during a protest in Dhaka, Bangladesh, Thursday, Aug. 2, 2018. Students blocked several main streets in the capital, protesting the death of two college students in a bus accident in Dhaka. (AP Photo/A. M. Ahad)

DHAKA, Bangladesh — Five days of protests by tens of thousands of students angry over the traffic deaths of two of their colleagues have largely cut off the capital Dhaka from the rest of Bangladesh, as the demonstrators pressed their demand for safer roads.

The protests began last Sunday after two college students were struck and killed by a pair of buses and eventually paralyzed the capital of 10 million.

An angry mob set fire to a bus after it hit and killed a biker on Friday morning in Dhaka’s Moghbazar area. No casualties were reported.

The two buses involved in the Sunday accident were racing to collect passengers, a common occurrence in the city, which is regularly gridlocked by traffic chaos. One of the bus drivers fled the scene, although both were later arrested.

Students then stopped thousands of vehicles — including those of top officials and judges — demanding to see if the cars were registered and the drivers licensed. One minister had to abandon his vehicle in the street after protesters found that his paperwork was not in order, according to news reports.

There was no sign of mass protests Friday, the beginning of the country’s weekend, but dozens of people formed a human chain in front of the main press club in Dhaka to call for transportation reform.

“We must bring changes,” said Selina Akter, a mother of two schoolchildren who joined the group. Some other groups also took to the streets in other parts of Dhaka.

Corruption is rife in Bangladesh, making it easy for unlicensed drivers and unregistered vehicles to ply the roads. At least 12,000 people die each year in road accidents often blamed on faulty vehicles, reckless driving and lax traffic enforcement.

Abdur Rahim, a leader of the Bangladesh Road Transport Workers’ Federation, said bus operators would stay off the streets until security improves. A handful of buses were attacked during the protests.

“We have invested a lot of money to do business. We can’t let people burn our vehicles in the name of protests,” he said. “We need our security too.”

Buses are key to transportation in Bangladesh, where trains are overcrowded and most people cannot afford cars.   /muf