Duterte: God assured me all EJK victims will go to heaven 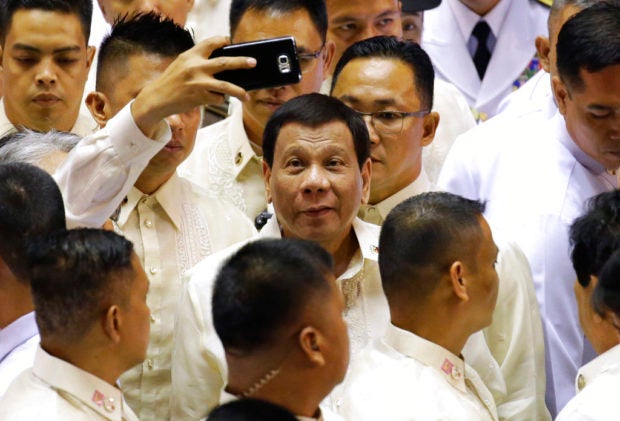 DAVAO CITY— In what appears to be a mocking comment against his critics, President Rodrigo Duterte said Friday God promised him that all victims of extrajudicial killings would go to heaven.

“Enjoy your human rights in heaven,” Duterte said, addressing critics of his drug war that had killed thousands after he assumed office.

“God promised me all extrajudicial killing victims will go to heaven, iyan ang hiningi ko sa Dios. Sabi naman ng Dios, ‘pwede, pwede [That’s what I asked from God and God said, it can be done, it can be done],’” Duterte said.

“Gawin ko ba iyan kung walang guarantee? Kawawa naman, [Will I do it without guarantee? What a pity] now, they have consolation, they will go to heaven,” Duterte said as he led the inauguration of the Northern Mindanao Wellness and Reintegration Center in Malaybalay City, Bukidnon.

“They’re doing drugs and they go to hell? Now, we have a consolation, they’re going to heaven. I said, God, just allow them, I am not asking for anything,” he said.

“Reserve the hottest place in hell for me and may I burn until eternity,” he said, but added, “If there’s hell.”

“Why would God create an oven for his creation? I said I have a God but it is not your stupid God,” he added.

But the police maintained that the government did not have any policy “to kill drug suspects” in their operations.

The International Criminal Court in The Hague is currently investigating Duterte for drug-related killings based on the complaints of his former police aide and self-described assassin who told the court that the President had ordered the deaths of criminals and political foes when he was the mayor for decades of Davao City in the southern Philippines. /jpv