Duterte dares to accompany ABS-CBN in opening his bank account 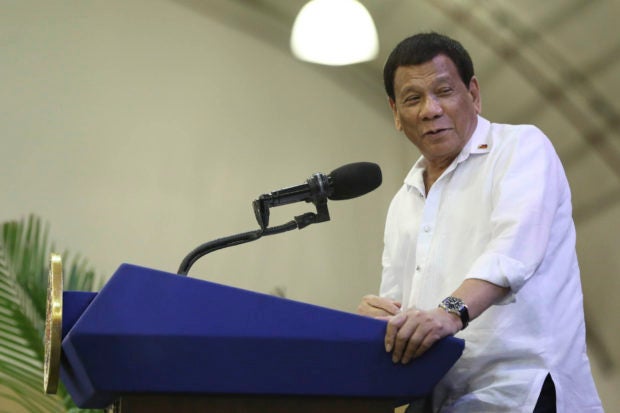 DAVAO CITY— President Rodrigo Duterte on Friday dared television network ABS-CBN to go with him to the Central Bank and he will open his account.

He said if his account exceeded P40 million, he would resign but if not, he would line his critics up and slap them one by one.

“I am challenging ABS-CBN,” President Duterte said during the inauguration of the Northern Mindanao Wellness and Reintegration Center in Malaybalay City, Bukidnon.

“Magpunta kami sa (We will go to the) Central Bank and I will ask the governor to open my account. I will not give it to the son of a b*tch na kalaban ko (who is my enemy),” he said, referring to Senator Antonio Trillanes III.

“This is a challenge which I am hurling at you now. If my bank account exceeds 40 million, I will step down,” Duterte said.

“Pero, pag hindi umabot ng 40 million, mag linya kayo lahat at sasampalin ko kayo isa-isa.  Akala ninyo kasi lahat ng tao magnanakaw. (If the amount does not reach P40 million, then, you have to line up and I will slap you one by one. You think everyone is a thief). That’s the problem,” he added.

Trillanes has been urging the President to sign a waiver to the bank secrecy law and open his bank accounts. The senator, who is one of Duterte’s fiercest critics, even launched a nationwide signature campaign called “Sign the waiver!”  /jpv