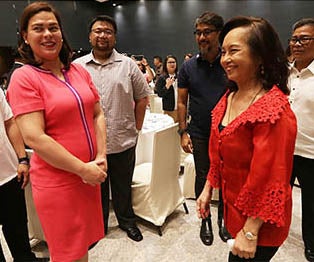 The two women came in red and were seated beside each other during the event at a Quezon City hotel.

“Very nice and pleasant,” was how Arroyo described the lunch.

The mayor, eldest daughter of President Rodrigo Duterte, was reported to be instrumental in convincing lawmakers to back Arroyo for the speakership, though she has yet to confirm this.

The mayor has tussled with Alvarez over his remarks early this year that her newly formed regional party, Hugpong ng Pagbabago, was part of the opposition.

Alvarez, the secretary general of Partido Demokratiko Pilipino-Lakas ng Bayan, had also boasted in a speech that he could have the President impeached.

At the gathering on Monday, Arroyo thanked her colleagues in the House of Representatives for their support and asked them to continue working, according to Capiz Rep. Fredenil Castro.

“Let’s buckle down to work,” Castro quoted Arroyo as telling the guests at the lunch.

He said Mayor Duterte was just invited to the event as a guest, as far as he knew.

The change in House leadership occurred a few minutes before President Duterte’s third State of the Nation Address (Sona).

The power struggle, which took place in full view of foreign dignitaries and other Sona guests, delayed the Chief Executive’s speech for about an hour and nearly caused him to walk out of the venue.

Read Next
Sotto surprises Senate employees with extra allowance, drug test
EDITORS' PICK
Climate Change Commission and Nestlé PH to discover sustainability-focused solutions
Gordon calls 2 Pharmally execs ‘Senate fugitives’ after no-show in probe
Legarda emphasizes role of ICC/IPs in nation building this IP month
NCR’s COVID-9 alert level may be downgraded from 3 to 2 soon — DOH
Isko Moreno bares ‘two-pronged’ approach to rehabilitate MSMEs
What’s at stake for every fighter at ONE: NextGen
MOST READ
LJ Reyes says Paolo Contis made ‘no efforts’ to talk to her after their split
Gordon to Duterte: You? Teaching me courtesy?
Yang’s Princeton degree raises eyebrows among senators
PDP-Laban Cusi wing Senate bets willing to give way to Duterte
Don't miss out on the latest news and information.