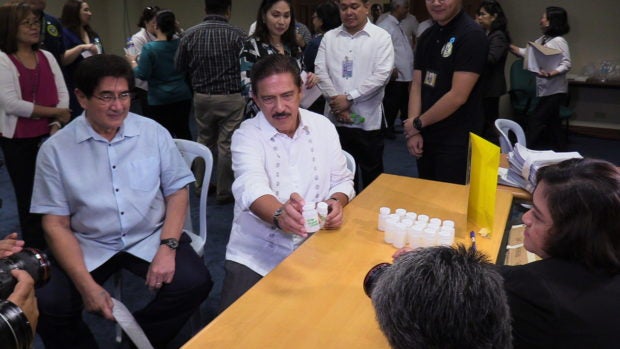 Twin surprises — one pleasant, the other not-so-pleasant —awaited Senate employees on Monday morning: an additional P5,000 allowance per month and a random drug test.

Taking a carrot-and-stick approach, Senate President Vicente Sotto III made the announcement to the Senate workforce, craftily delivering the good news first before the bad one.

“So the Senate leadership can show its appreciation to your dedication and diligence, and in understanding of your situation brought on by rising prices, I would like to announce that we have considered the request of the Senado Union for your grocery and transportation allowance,” he said.

“Upon consultation and based on the recommendation also of our chairperson in the committee of accounts, Sen. Ping Lacson, and upon studying our financial and budgetary situation, we have decided to give an increase … in the amount of P5,000, effective on July 1, for rank-and-file only,” he added.

The announcement was met with applause by the employees gathered during the flag ceremony in front of the Senate building.

Their reaction was less enthusiastic when Sotto delivered the last part of his speech.

“Before we end, I have been informed that as part of the Senate’s commitment to a drug-free environment and workplace… there will be a random mandatory drug testing today,” he said.

More than 300 randomly picked employees out of about 2,000 were to take the drug test.

For the first time, according to Sotto, the Senate would be using a five-panel test to screen for all types of illegal drugs.

He said the drug testing was pursuant to Civil Service Memorandum Circular No. 13 of 2017, and the Comprehensive Dangerous Drugs Act of 2002.

The Senate leader, along with Sen. Gregorio Honasan II, volunteered to be the first ones to undergo drug testing.

“I therefore urged Senate employees whose names are randomly called … to submit themselves immediately to the mandatory drug test. We must lead the way in ensuring that we have a healthy and drug-free workplace, workforce in the Senate,” Sotto said.

The five-panel test, he said, would be able to detect other drugs besides marijuana and “shabu” (crystal meth), such as amphetamines, heroin, cocaine and even party drugs.

Asked what would happen to those who tested positive, he said: “There will be confirmatory testing, because testing positive is inconclusive of drug dependence … If they are still positive, they will be given counseling, rehabilitation.”

Under Republic Act No. 9165, however, those who test positive may face suspension or lose their jobs.