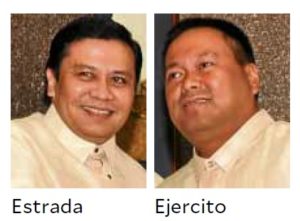 The prospect of having two brothers serving in the Senate at the same time and belonging to the same party “wouldn’t look good,” Sen. JV Ejercito said on Monday.

So the reelection-seeking senator is planning to leave his father’s Pwersa ng Masang Pilipino (PMP) party for the Nationalist People’s Coalition (NPC). This way, he and his half-brother, Sen. Jinggoy Estrada, wouldn’t have to campaign together in the run-up to the 2019 midterm polls.

“I thought it wouldn’t seem proper to have us two brothers running [for senator] at the same time and belonging to only one party. It would not look good,” Ejercito told reporters.

Estrada, who is out on bail while facing plunder charges, is widely expected to declare his intention to run for senator under PMP, the party founded by their father, Manila mayor and former President Joseph Estrada.

“I’m considering transferring to another party. It was supposed to be PDP [Partido Demokratiko Pilipino-Lakas ng Bayan], but that didn’t push through,” Ejercito said.

“So it’s NPC, and Hugpong [ng Pagbabago] would adopt me… That will be the ideal party and support I will get,” he added.

“I have spoken to Senate President [Vicente] Sotto about the possibility [of transferring]… [O]ur Senate President belongs to the NPC, and if I have to move, it’s NPC I’m most comfortable with,” he said.

Jinggoy is the eldest son of Mayor Estrada with wife, former Sen. Loi Estrada; while Ejercito is the son of the former President with Guia Gomez, mayor of San Juan City. —DJ Yap