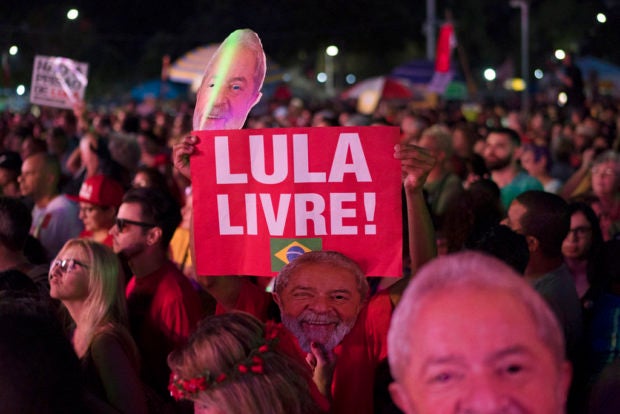 A supporter holds up a sign with a message that reads in Portuguese: “Lula Free” during the Lula Free festival in Rio de Janeiro, Brazil, Saturday, July 28, 2018. Image: AP Photo/Leo Correa

RIO DE JANEIRO (AP) — Some of Brazil’s most popular musicians called for jailed former president Luiz Inacio Lula da Silva to be freed in a concert Saturday in Rio de Janeiro attended by tens of thousands of people.

Da Silva, a leftist ex-president universally known as Lula, was convicted of corruption and money laundering, but his supporters say the sentence was politically motivated. 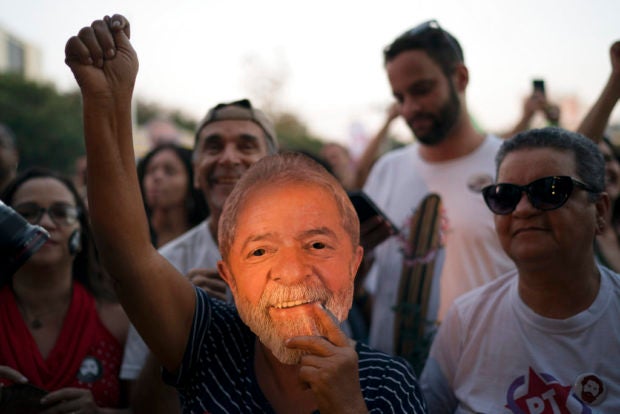 Da Silva’s image could be seen everywhere: On shirts, bandanas and masks, while his animated image danced on screens next to the stage. In between sets, supporters broke out into chants of “Free Lula!” as organizers urged them to scream loud enough for da Silva to hear them from the southern city of Curitiba.

The former president was jailed there after his corruption conviction was upheld on appeal. He is one of many top politicians and business leaders to get brought down in the so-called “Car Wash” investigation. Launched in 2014, investigators uncovered a colossal corruption scheme in which construction companies used inflated state contracts to kick back millions of dollars to politicians and other officials.

Da Silva’s 12-year sentence divided people in Latin America’s largest nation, with his critics celebrating a victory against endemic corruption while supporters argue it amounts to a witch hunt against left-leaning parties and politicians.

Despite it all, da Silva remains one of Brazil’s most popular politicians. He is currently leading polls for October’s presidential race.

“Lula is the voice of the people,” said Tayna Sena, a 22-year-old law student who attended the concert. “The elites are scared because even when he’s in jail, he can get more support than any other politician.”

It’s unlikely that he gets on the ballot, though that hasn’t stopped him and supporters from campaigning. Brazil’s Clean Slate law prohibits a convict whose appeal has been upheld from running for office.

Earlier this month, it briefly looked like da Silva might be freed when a lower court judge repeatedly ordered his release — only to be overruled each time.

“An election without Lula would be fraudulent,” said 56-year-old doorman Adelson Pereira.

Da Silva’s supporters, including big names in the Brazilian art scene, remain determined to get his name on the ballot. Nostalgic for the social programs and booming economy of his presidency, they stage protests, sign petitions or organize concerts.

“In Brazil, there is a tradition of many famous artists supporting left-leaning causes,” said Ricardo Cravo Albin, one of Brazil’s most important musicologists.

The researcher believes Chico Buarque plays a crucial role in getting the support da Silva receives in the artistic community.

“Chico Buarque’s leadership is undeniable. He’s one of the most respected artists in the country,” Cravo Albin explained. “So if he urges other musicians to show their support for Lula, they’re more likely to join in.” NVG