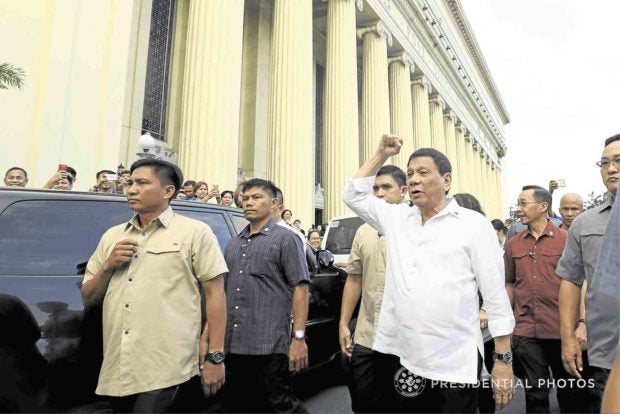 A RING AROUND RODY Members of the Presidential Security Group form a protective shield around their Commander in Chief as he arrives at Liwasang Bonifacio in Manila in this Jan. 18 file photo. —MALACAÑANG PHOTO

This must be the reason why the Presidential Security Group (PSG) has decided to ban pens and pencils during presidential visits in provinces and cities. And bottled water, too.

Could these items be used as improvised weapons?

In Barangay Labuan here, about 36 kilometers from the city, journalists covering the President had to enter the venue without their tools of the trade. Bottles of water also were not allowed inside.

Social workers, disaster personnel, teachers, students and nurses suffered the same fate and were barred from bringing pens and bottled water into the place where the President was scheduled to speak.

The PSG personnel offered no explanation for the new policy but a female guard frisking women entering the venue said it was part of security protocol.

Prior to Mr. Duterte’s event here in Labuan, the President told his audience in Ipil town in Zamboanga Sibugay province that he had made many enemies. He also received reports of threats against him upon his arrival, he added.

“I don’t know why you’re never satisfied. We have the BBL (Bangsamoro Basic Law) already,” he said, referring to the newly signed Bangsamoro Organic Law. “As a matter of fact, I am going around but you know, you’d have to know that I have threats when I came here,” Mr. Duterte said.

He even made fun of an alleged bomb, saying, “I told them, well, there’s a bomb there? Then, let it explode,” the President said.

“I have nowhere to go, anyway. I can’t run for kagawad or barangay captain anymore. So, three years from now, I am done,” he said, referring to the end of his term as President.

Journalists covering Mr. Duterte in Ipil told the Inquirer that their pens and bottled water were not confiscated, although they were kept at a certain distance as part of the security protocol in past presidential visits.

Chief Supt. Billy Beltran, regional director of Police Regional Office 9, said he had no immediate information about the threat on the President in Western Mindanao, particularly in Zamboanga City.

“The PSG is silent about it. In case there’s a threat, the PSG will not make those details public,” Beltran said.

“We just follow the PSG orders for normal security preparations like increasing personnel for his travel and performing sweeping operations in areas where he will be going and these are all normal security procedures. In case he has threats, the PSG didn’t say anything,” he said. —JULIE ALIPALA