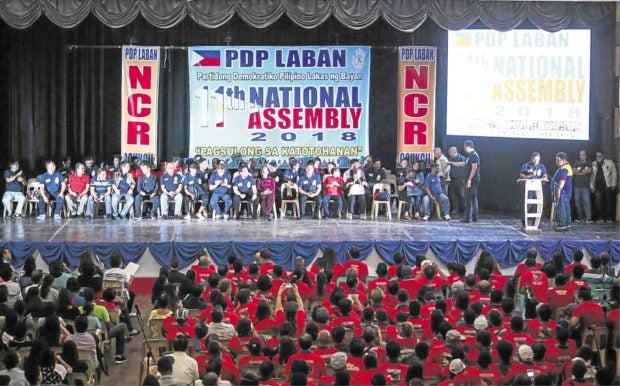 The members of the splinter group, claiming they were the “genuine” representatives of PDP-Laban, on Friday “elected” their own set of party leaders during a “national assembly.”

The move followed Pimentel’s replacement as Senate President by Sen. Vicente Sotto III in May and Alvarez’s unceremonious ouster on Monday as Speaker of the House by former President and Pampanga Rep. Gloria Macapagal-Arroyo.

Pimentel disowned the group, saying its “rogue members” had already been expelled or never legitimately belonged to the party chaired by President Duterte.

He threatened to file cases, “if warranted,” against the group of Willy Talag, chair of PDP-Laban National Capital Region (NCR) membership committee, which led the assembly held at Amoranto Sports Complex in Quezon City.

In a text message to the Inquirer, Pimentel said he was “not threatened” by the move.

“Don’t believe them and just enjoy their show,” Pimentel said in a separate message to other reporters.

“We wish to inform the party members and the public that these individuals have no authority to represent the party or its national council and are therefore usurpers of party authority and shall be dealt with in accordance with existing election and criminal laws and party rules,” the letter said.

At the assembly held inside Amoranto Theater, Talag, who is also president of PDP-Laban Makati City council, was named the new PDP-Laban secretary general while Rogelio Garcia was picked as its new president.

Special Assistant to the President Christopher “Bong” Go, who was not present, was named auditor of the group.

Go and Mr. Duterte have not made any public comments on the turmoil in the party.

Talag said the leadership under Pimentel had violated party rules, such as conducting mass oathtaking for new members who had not undergone “proper basic seminars” and recruiting officials “involved in illegal drugs.” He did not elaborate.

He added that Pimentel had also failed to call national assemblies as mandated by party rules.

Talag, who has been a party member for the past four years, said one of the party’s founders and Pimentel’s father, Aquilino “Nene” Pimentel Jr., knew that what they had planned was in accordance with the party constitution and bylaws.

Garcia, who is based in General Santos City and has been the party’s chair  in Soccsksargen since 2000, said Pimentel and Alvarez were still members of the party. He added that the new leaders would continue to support Mr. Duterte and the shift to federalism.

He insisted that they were the “legitimate PDP-Laban” and they were “willing and able” to face any complaint from Pimentel’s camp.

“We are not rogue members, we’re legitimate party members ever since. We were already together with his father even before Koko Pimentel became a senator,” Garcia told reporters.

He also said the assembly had been “planned long before Speaker Alvarez was ousted.”

The “nominations” for the national council positions ended at midnight on Thursday, Garcia said. There was only one nominee for each position and all nominees were elected via viva voce, he added.

Garcia said about 4,000 attended the meeting, but the venue caretaker told the Inquirer the theater could only accommodate about 1,000 people.

The gathering was also attended by about 30 pro-Duterte supporters of the late dictator Ferdinand Marcos and his son, defeated vice presidential candidate and former Sen. Ferdinand “Bongbong” Marcos Jr.

The group, however, walked out after one of the speakers on stage called Marcos a dictator.

PDP-Laban was formed with the merger of PDP and Lakas parties, which were established to fight the Marcos dictatorship in the early 1980s. —WITH A REPORT FROM DAPHNIE BELTRAN