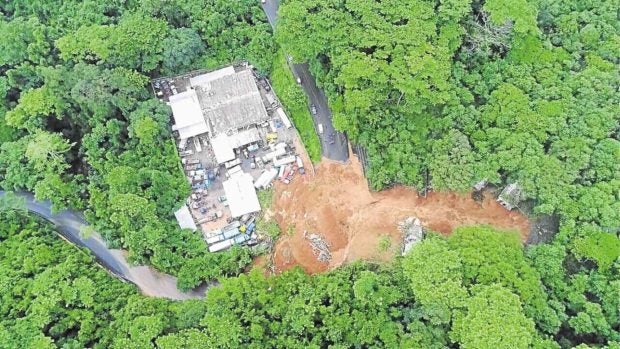 DEADLY PILE Site of the massive landslide that killed a person inside the Subic Bay Freeport Zone on Monday. —CONTRIBUTED PHOTO

The death toll and cost of damage left by days of rain were rising as some areas remained under water while in other communities, residents have yet to clear houses of mud and debris swept into neighborhoods by rampaging floodwater.

The latest fatality was discovered at the Subic Bay Free Port Zone, although officials withheld details.

The victim’s body was dug out of a massive landslide that struck the compound of Vieva Sun International Trading Development Corp. along Aparri Road in Cubi Point.

The area was buried in rocks and mud let loose by “habagat,” or southwest monsoon, rains made heavier by storms that started last week.

A survivor, identified as Mariel Rillen, was pulled out a little before 7 a.m. on Monday.

She said no details would be released until the victim’s next of kin had been notified. The victim was believed to be from Mindanao.

In Occidental Mindoro, at least four people were killed when Tropical Storm “Josie” brought rain and flooding to a large area of the province.

The latest fatality there was a Mangyan boy, Pinoy Edes, 3, who drowned in a creek, according to Supt. Imelda Tolentino, information officer of the Mimaropa (Mindoro, Marinduque, Romblon and Palawan) regional police office.

Edes, of the Alangan Mangyan tribe, drowned after he fell into the creek while playing near Pandurucan River in the village of Pagasa in Sablayan town around 5 p.m. on Monday.

Tolentino said Edes was the fourth fatality reported in the province attributed to Josie and monsoon rains. 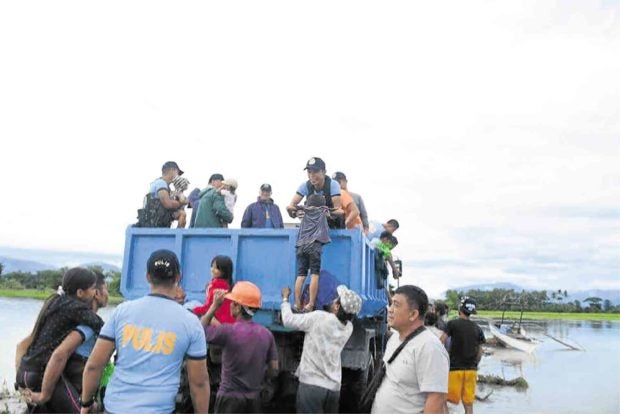 FLIGHT Hundreds of residents of Occidental and Oriental Mindoro being evacuated at the height of rains. —CONTRIBUTED PHOTO

The three other fatalities were Nina Pernito, 28, and her year-old daughter Janna, who died in a landslide in Pagasa; Jessie Manzo, of the village of Sta. Lucia also in Sablayan, who died when a tree fell on him.

In Nueva Ecija, heavy rains and floods destroyed P84.1 million worth of rice and vegetable being grown in low-lying towns of the province.

In Subic, Eisma said SBMA workers were starting to clear the landslide site.

She said heavy equipment, owned by locators, had arrived in the area to help.

The SBMA board of directors had declared a state of calamity in the free port.

In Nueva Ecija, the estimated loss was 1.3 million sacks of rice, according to Umali. 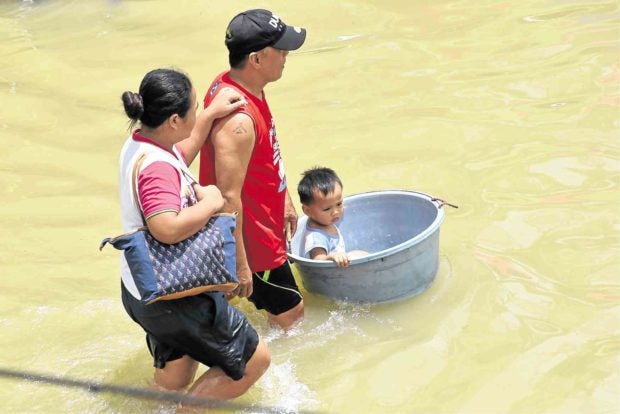 INGENUITY A couple lets their child ride in a tub in middle of a flooded street in Dagupan City. —WILLIE LOMIBAO

The provincial government, she said, would distribute seeds to farmers.

“We will extend all resources to help the affected farmers get back on their feet,” Umali said.

In Pangasinan province, where a state of calamity had been declared, classes in 14 towns and cities remained canceled on Tuesday although floodwaters began to recede.

Dagupan City and neighboring Calasiao and Sta. Barbara towns, which are traversed by the swollen Sinocalan River, were still flooded partly due to the breaching of a dike along the river at Barangay Alibago in Sta. Barbara.

As of 8 a.m. on Tuesday, a section of the highway at Barangay Bued in Calasiao was still submerged, making it unpassable to light vehicles.

Access to Dagupan was difficult because of the submerged section of the Urdaneta-Dagupan and Lingayen-Dagupan roads. Commuters took buses or trucks, waded through the flood or rode on “kuliglig” (hand tractor-drawn carts) to their destinations.

A bridge along the Pangasinan-Tarlac Road was also closed to traffic after it was weakened by strong river current. The Department of Public Works and Highways said it was putting up a bailey bridge.

At least 46,000 residents in 31 villages in Pangasinan were affected by the floods. 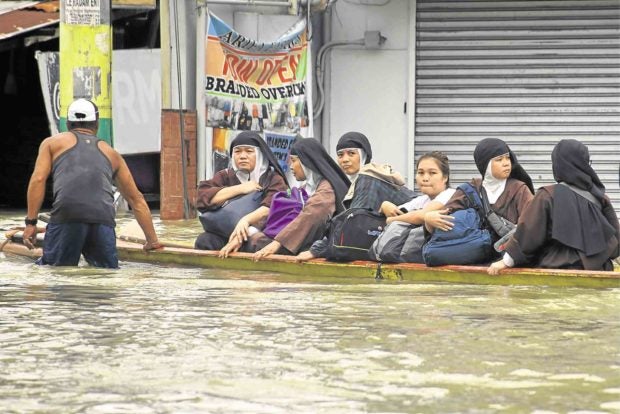 NOT WATERPROOF Nuns protect their habits from getting wet by riding a boat on flooded Burgos Street in Dagupan City. —WILLIE LOMIBAO

In Batangas, search and rescue operations continued for 17-year-old Daryl Torio in the village of Lumbangan, Lian town.

The Calabarzon (Cavite, Laguna, Batangas, Rizal and Quezon) Disaster Risk Reduction and Management Council said Torio went missing on Sunday after he went fishing with friends in a river.

The report said water level in the river rose at the height of strong rains and swept the victim away.

Police reported the evacuation of hundreds of villagers in the two Mindoro provinces.

Tolentino, the Mimaropa police spokesperson, said in an e-mail on Sunday that roads and bridges in Calintaan town, Occidental Mindoro, suffered P5 million in damage.

In Oriental Mindoro, villages were flooded in the towns of Naujan, Baco, Bulalacao and Bongabong and the City of Calapan.

The Mamburao and San Luis bridges were unpassable because of the floods.

A bridge was broken in the town of Paluan and similar damage was reported in roads and bridges in the towns of San Jose and Sta. Cruz.