President Rodrigo Duterte admitted on Monday that his administration’s war on drugs was far from over.

“Let me begin by putting it bluntly: the war against illegal drugs is far from over,” Duterte said in his third State of the Nation Address (Sona) at the House of Representatives in Quezon City.

“Where before, the war resulted in the seizure of illegal drugs worth millions of pesos. Today, they run [into] billions in peso value. I can only shudder at the harm that those drugs could have caused had they reached the streets of every province, city, municipality, barangay and community throughout the country,” he added.

He said the government’s war on drugs would be “relentless,” adding that  illegal drugs menace has “dysfunctionalized families and ruined relationships.”

“This is why the [war on] illegal drugs will not be sidelined. Instead, it will be as relentless and chilling, if you will, as on the day it began,” he said.

“These drug dealers know fully well that their business is against the law. They know the consequences of their criminal acts, especially when caught in flagrante delicto and they violently resist arrest. They know that illegal drugs waste away lives, dysfunctionalize families, and ruin relationships. They know that once hooked, addicts will die slowly – slow deaths,” he added.

But the President said drug suspects continue to disregard the harm being brought about by illegal drugs.

“And yet, they persist in doing what they do, oblivious to the terrible harm that they cause to the people and communities,” he said. 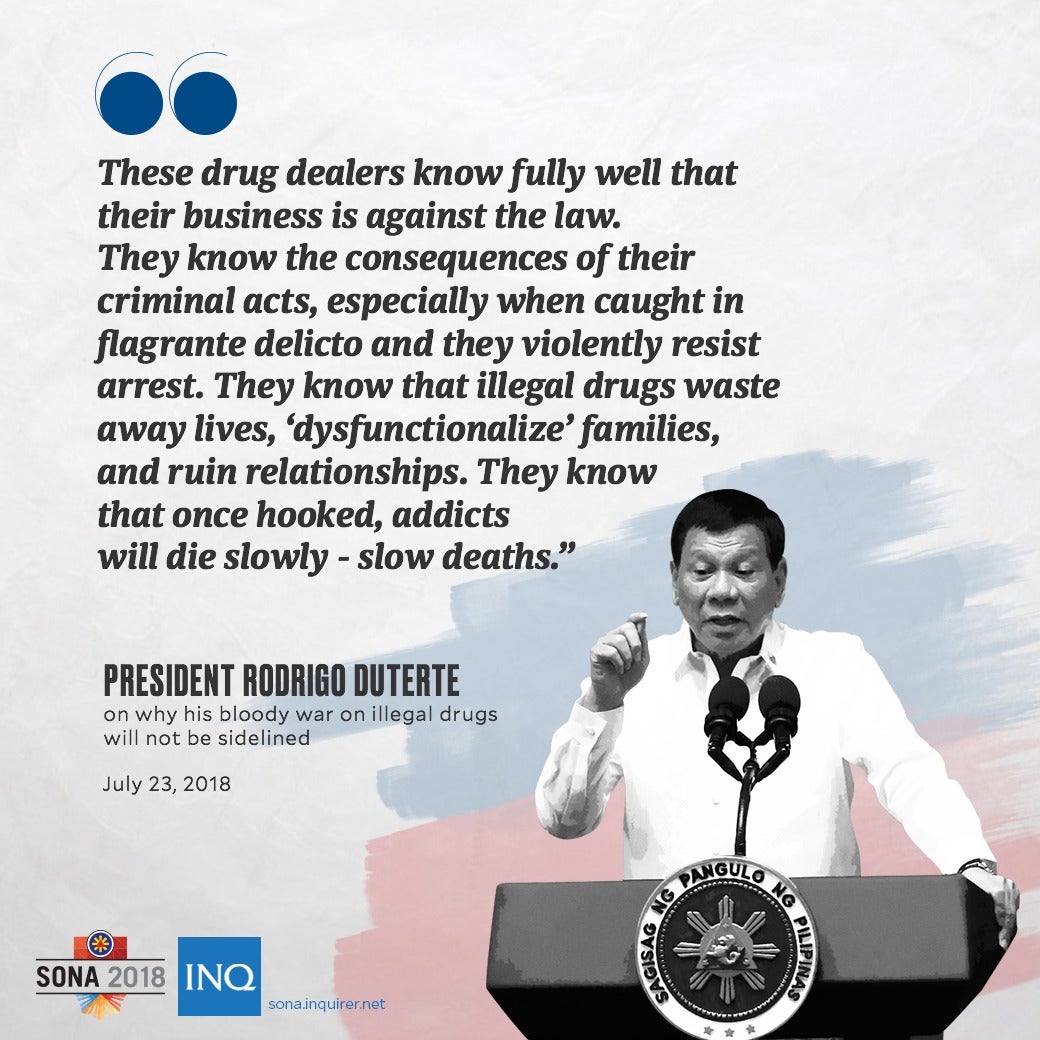 “And when illegal drug operations turn nasty and bloody, advocates of human rights lash at—and pillory—our law enforcers and this administration to no end,” he said.

“Sadly, I have yet to hear really howls of protest from the human rights advocates and Church leaders against drug-lordism, drug dealing and drug pushing as forceful and vociferous as the ones directed against the alleged errant [law] enforcers in the fight against this social scourge,” he added

He remained unfazed with the global condemnation on his narcotics crackdown.

“If you think that I can be dissuaded from continuing this fight because of [your] demonstrations, your protests, which I find, by the way, misdirected, then you got it all wrong,” he said.

“Your concern is human rights, mine is human lives. The lives of our youth are being wasted and families are destroyed, and all because of the chemicals called shabu, cocaine, cannabis, and heroine,” he added.