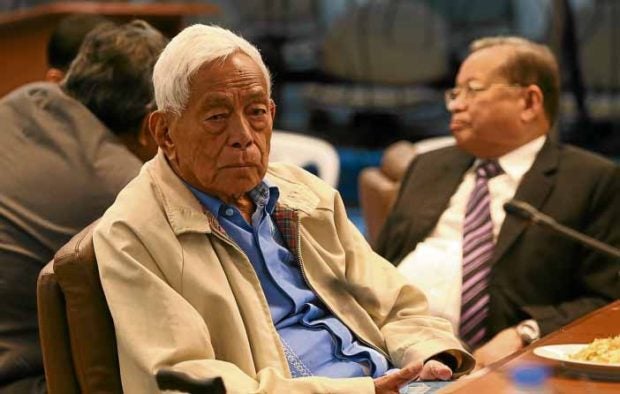 The draft federal constitution would give the President another ground to declare martial law and be a dictatorial leader, and would lock the Philippines in the federal structure perpetually, legal and political experts warned at a Senate hearing on Tuesday.

The inclusion of “lawless violence” as another ground for the President to declare martial law bolsters the reality of dictatorial rule, former Chief Justice Hilario Davide said.

Bayan Muna Rep. Neri Colmenares raised a similar concern, saying the provision would allow the President to use the killings of drug suspects, mayors and priests to put the country under martial law.

“Lawless violence is a police matter. There is no need for the military to address that,” he said.

The power of the President to call out the military to help deal with such a situation is already sufficient, Azcuña said.

Aside from this, there is also too much emergency-rule power given to the President, Colmenares said.

He cited the provision stating that in the event of a cyberattack on any public utility, or private entity, or cyberinstallation that endangers the security of the federal republic, the President “shall take all necessary actions to repel and quell the attack.” The President would also be required to make a report to Congress.

“This is a new power to take a very vaguely defined necessary action,” Colmenares said.

The President is already given a wide latitude to declare martial law. So why is this necessary? he asked.

Colmenares also raised concerns about the provision stating that in case any region fails to comply with its obligation and seriously undermines the sovereignty, territorial integrity, economy, or the unity of the federal republic, the President may intervene and take all measures necessary and proper to deal with the failure. This would allow the President to control the regions.

“This is a new emergency-rule power on a vaguely defined premise that a region failed to comply with its obligations under the Constitution,” he said.

Colmenares also questioned the provision stating that when Congress is unable to convene due to war or national emergency, the President “shall exercise all powers necessary to resolve the situation.”

Christian Monsod said people must think about the implications of the idea of a surveillance warrant as provided for in the draft Constitution, and the deletion of the phrase saying the state “guarantees full respect for human rights.”

“Was the deletion of ‘human rights’ deliberate? If so, why?” De Lima said in a statement.

The draft prepared by Malacañang’s consultative committee states: “The federal republic values the dignity of every person and guarantees full respect for the person and the right of all citizens to participate in all government processes.”

Davide and Colmenares also questioned the provision that would clear the way for the Philippines to be perpetually locked into a federal government.

The provision states: “The democratic and republican character of the government, its federal structure, its indissolubility and permanence shall not be subject to amendments or revisions.”

The provision deprives the people of their power, Davide said.

“Where is now the underlying principle that in a democratic and republican state, sovereignty resides in the people and all government authority emanates from the people?” he said.

Colmenares said the provision would deprive Filipinos the chance to change the system of government when federalism proved to be a failure.