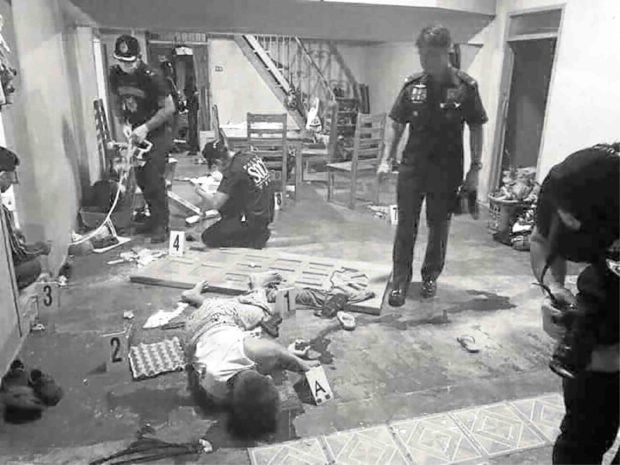 GENERAL SANTOS CITY—Authorities here on Monday arrested the wife of the new head of Maute terror group in an operation that also killed a suspected bomb expert.

Dar had assumed leadership of Maute after its founding leaders, Omarkhayam and Abdullah Maute, were killed in Marawi last year.

Morales said Nafisah was “undergoing interrogation.” “She did not resist arrest and she did not deny being wife of Abu Dar,” Morales said.

The raiding team killed Najib Calimba Pundug, alias Najib Hussein, 32, a suspected bomb maker, during the 2:30 a.m. operation to arrest Nafisah in the village of Fatima.

A pistol, bomb-making materials, two hand grenades, an IS flag and a white car were found in the house.

“We have been telling him to surrender,” Najifah told reporters after she and six others were also arrested for alleged obstruction of justice.

“If you will not surrender, please stop coming here,” Najifah, 35, a teacher, recalled telling her younger brother.

“I repeatedly appealed to him to reform and live a normal life and have mercy on his children, to no avail,” she added.

Supt. Aldrin Gonzales, speaking for the regional police, said neighbors in Fatima were unaware of the suspects’ presence in the village until Monday’s raid.

Kalil, a neighbor, said he saw the slain bomb maker come and go in the village and was unaware he was wanted by the law.

Najib was in the Department of Defense Arrest Order No. 1 as a high-value target.

The raiding team was out to serve the arrest warrant but as the law enforcers entered the house, Najib opened fire with a .45-caliber pistol, wounding a police officer, according to Morales.

PO3 Jerry Feo, of the Regional Mobile Force Battalion and raiding team leader, was hit four times and is now recuperating in a hospital.

Morales vowed that police would continue the hunt for terrorists in the region and save innocent lives. —EDWIN O. FERNANDEZ