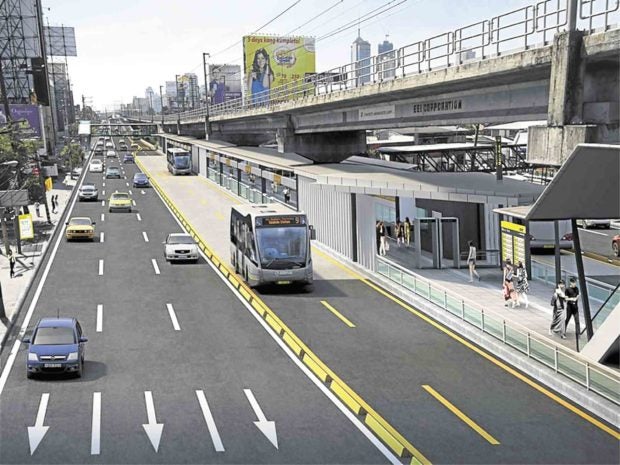 The Department of Transportation (DOTr) has put on hold the implementation of the three Bus Rapid Transit (BRT) systems in Metro Manila and Cebu, a P53-billion project proposed during the previous administration.

In a press conference in Clark, Pampanga on Tuesday, Transport Secretary Arthur Tugade said the BRT project would be deferred pending further study.

But even before Tuesday’s announcement, Tugade had expressed disinterest in the project, saying BRT systems would worsen traffic on already congested roads.

The BRT project envisions a dedicated lane for specialized buses and stations. It is one of the traffic solutions included in the Duterte government’s “Build, Build, Build” program.

The DOTr, however, has argued that the project actually posed logistical nightmares given the number of available lanes and road infrastructure.

The Quezon Avenue BRT system, for example, would run counter to the ongoing construction of the Metro Rail Transit 7 extension line, according to Transport Undersecretary Tim Orbos.

The 48.6-km Edsa BRT line, on the other hand, might worsen traffic flow on the congested five-lane thoroughfare, Orbos added.

As for the P2.4-billion Cebu BRT system, Orbos said it was still included in the DOTr’s “basketful of solutions” that would soon be outlined in a letter to the Department of Finance (DoF) and National Economic Development Authority (Neda) to solve congestion in the province.

Orbos did not elaborate on the other solutions, saying only that the proposal included an array of transport alternatives from both the road and railway sectors.

The deferment of the BRT project underscored a key 2017 Commission on Audit (COA) report which pointed out that most of the DOTr’s delayed or failed projects were due to “frequent changes in policy directions by political leaders and economic managers.”

Initially identified as one of 75 high-impact government projects in 2016, the proposal to build BRT lines hit a snag after Tugade said he was not inclined to approve it.

It was also one of the DOTr projects flagged in the COA report for being “funded but not implemented or only partially accomplished.”

In letters to both DoF and Neda, the DOTr earlier sought to scrap the BRT scheme and instead funnel funding to other projects it deemed more viable like the 25-km Metro subway project. —WITH A REPORT FROM FATE COLOBONG