UK’s Theresa May: Trump told me to ‘sue the EU’ over Brexit 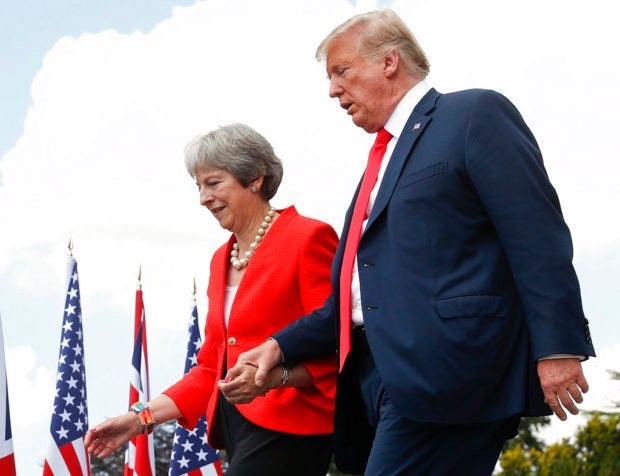 President Donald Trump and British Prime Minister Theresa May hold hands at the conclusion of their joint news conference at Chequers, in Buckinghamshire, England on July 13, 2018. AP

LONDON  — Donald Trump advised British Prime Minister Theresa May to “sue” the European Union in the tense negotiations over Britain’s exit from the bloc, May said Sunday.

The American president told reporters Friday at a joint press conference with May that he had given the British leader a suggestion that she found too “brutal.” Asked Sunday on the BBC’s Andrew Marr Show what that suggestion was, May said with an amused expression: “He told me I should sue the EU. Not go into negotiation, sue them.”

She added: “What the president also said at that press conference was ‘Don’t walk away. Don’t walk away from the negotiations. Then you’re stuck.'”
Trump’s first official visit to Britain this week was overshadowed by explosive and undiplomatic remarks he made about May’s leadership, especially her handling of the Brexit negotiations.

In an interview with The Sun newspaper published Thursday — just as May was hosting Trump at a lavish black-tie dinner — Trump said the British leader’s approach likely “killed” chances of a free-trade deal with the United States. He said he had told May how to conduct Brexit negotiations, “but she didn’t listen to me.”

The comments shocked many in Britain — even May’s opponents. The US president later sought to soften the blow, telling reporters at Friday’s joint news conference that May was an “incredible woman” who is “doing a fantastic job” as prime minister.

He denied he criticized May, saying the Sun interview did not focus on his complimentary remarks about the British leader, but the Sun released audio that proved otherwise.

Trump’s comments threatened to weaken May’s already fragile hold on power. Her Conservative government is deeply split between supporters of a clean break with the EU and those who want to keep close ties with the bloc, Britain’s biggest trading partner.

Asked to rate US-UK relations, Trump gave them the “highest level of special.” He added it was up to May how to handle Brexit, though he wants to ensure the U.S. “can trade and we don’t have any restrictions” on commerce with the United Kingdom. /ee

Read Next
Russian meddling in US midterms? More fear than proof so far
EDITORS' PICK
TeaM Energy pushes development programs to help in pandemic rebound
Piolo Pascual: The Ultimate Heartthrob continues to level up
Vaccine supply is ‘biggest problem,’ Binay says after Duterte’s threat to arrest vaccine ‘skeptics’
Pangilinan says science-based solution is needed vs COVID, not fear based or arrest
Want to help local farmers? Shop small and eat Real Food
Vaccine profits: Making a killing from a killer virus
MOST READ
Duterte-Duterte tandem possible but ‘winnability is another question’ — Binay
Vaccine profits: Making a killing from a killer virus
Sharon Cuneta on living in the US: ‘Nagagawa ko lahat ng normal na bagay’
Pangilinan says LP making efforts to reach out to Lacson, Isko, others
Don't miss out on the latest news and information.