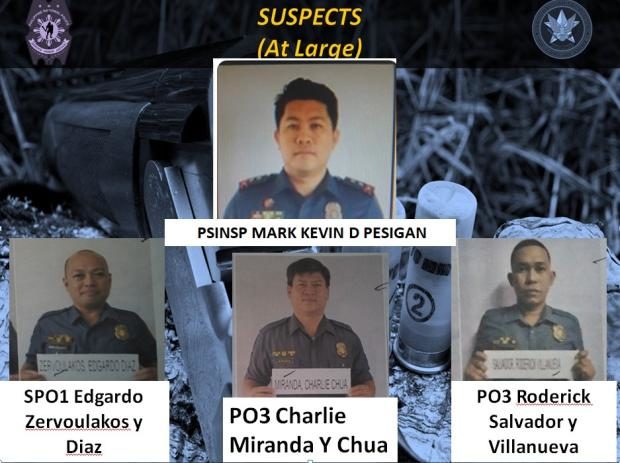 The NCRPO release this photo of four officers involved in an extortion case who are still at large.

The chief of Muntinlupa police and eight of its drug operatives were relieved from their posts after kidnapping a woman and her 7-year-old son in a fake police operation turned robbery-extortion scheme.

Members of the Regional Special Operations Unit (RSOU) of the National Capital Region arrested members of Muntinlupa Police Station Drugs Enforcement Unit (SDEU) in an entrapment operation at the fourth floor of the police station on Friday afternoon.

The NCRPO responded to a complaint of a 35-year-old man that SDEU personnel were demanding P400,000 in exchange for his live-in partner and their son.

Investigation found that the eight SDEU police officers barged into the complainant’s house in Barangay Tunasan at 11 a.m. on Friday “under the guise of a legitimate police operation.”

They arrested his 33-year-old live-in partner and their son for alleged illegal drugs possesion. The drug operatives, however, also carted away the family’s cash, jewelries, cellphones, a television set and a laptop.

At around 1:30 a.m. on Friday, the police officers called the man using his live-in partner’s phone and demanded P400,000 for the release of his family.

He was able to bring down the ransom to P40,000 and then asked help from the NCRPO.

After handing over the marked money to one of the suspects around 3 p.m. Friday, members of the NCRPO-RSOU barged intothe police station and found the kidnapped wife and son at a gym beside the SDEU office at the fourth floor of the building.

Some of the SDEU members locked themselves inside their office, forcing the responding police officers to break the door open. The officers were able to arrest four of their colleagues, while four others managed to escape.

The NCRPO was able to recover the stolen items in Dela Cruz’s car, which parked outside the police station.

The stolen items include eight cellphones, ID cards, P25,000 cash and a wallet containing a sachet of crystal meth (shabu).

The family’s LED TV set was found in another car owned by Jimenez.

Chief Supt. Guillermo Eleazar, director of the NCRPO, ordered the Southern Police District to remove Senior Supt. Dionisio Bartolome as chief of the Muntinlupa City Police Station, while they are conducting an internal investigation.

The arrested officers claimed they conducted a “legitimate anti-illegal drup operation.” But Eleazar saod that they “failed to present the necessary documents to support the lawful arrest of the victim,” including spot reports, coordination papers with the Philippine Drug Enforcement Agency (PDEA) and a laboratory examination request to the Crime Laboratory to confirm if the recovered evidence were illegal drugs.

The four officers were detained at the Muntinlupa City Police Station, where other drug suspects they had previously arrested were also jailed.

They were charged with kidnap for ransom and robbery. Dela Cruz would also be charged with violation of the Comprehensive Dangerous Drugs Act.

The NCRPO chief expressed dismay but warned scalawag police officers that he would be willing to use “the iron fist hand of internal cleansing” to recover the trust and confidence of the public. –With reports from Roselie Mari Villaflor and Kristel Limpot