Judge rules in favor of cigarette firms vs Bataan ordinance 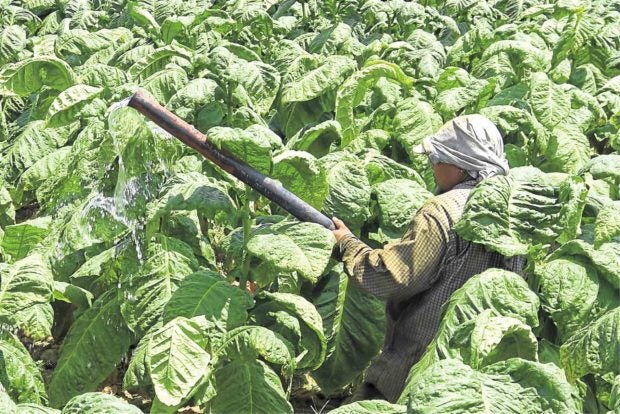 CASH CROP The world of smokers continues to shrink but tobacco farmers plod on, like this man in Villasis, Pangasinan, who waters his tobacco plants to protect them from heat. —WILLIE LOMIBAO

CITY OF SAN FERNANDO—Cigarette manufacturers have won the first round of their legal action against an ordinance banning smoking and the sale, distribution and promotion of cigarettes within the 80-hectare University Town and its kilometer radius in Balanga City.

In a 25-page decision, Inovejas said the ordinance “illegally amends, modifies and expands the prohibitions concerning the use, sale, distribution and advertisement of tobacco products by imposing a total ban.”

In its petition, PTI had argued that Philip Morris Philippines Manufacturing Inc. would lose P15 million in sales due to the city’s ban.

Inovejas “permanently enjoined” the city and its officials from implementing Section 1 of the ordinance. This law amended the city’s no smoking ordinance.

Balanga Mayor Francis Garcia said the decision would be appealed.

“Tobacco companies are like bullies. Cities should enforce their antismoking ordinances and disregard threats [to these local laws], which abide by the World Health Organization Framework Convention on Tobacco Control,” said Dr. Ulysses Dorotheo, director of the Southeast Asia Tobacco Control Alliance.

Dorotheo said he was disappointed that a court struck down the efforts of the city to protect the health of its youth and residents.

Davao, Muntinlupa and other cities have similar tobacco regulations, he added.

Rep. Jose Enrique Garcia III, who was mayor when the city council passed the University Town Ordinance, called the court’s ruling a setback but said he was certain the ordinance would be “upheld in the end.”

He said the antitobacco ordinance was “enacted pursuant to Balanga City police power to promote the general welfare and the constitutional policy of the state to protect and promote the right to health of the people.”

“If there is a material and substantial invasion of right in these cases, it is certainly not that of PTI and the interest it represents but the right to life of every person, an indispensable component of which is the constitutional right to health,” he said. —TONETTE OREJAS