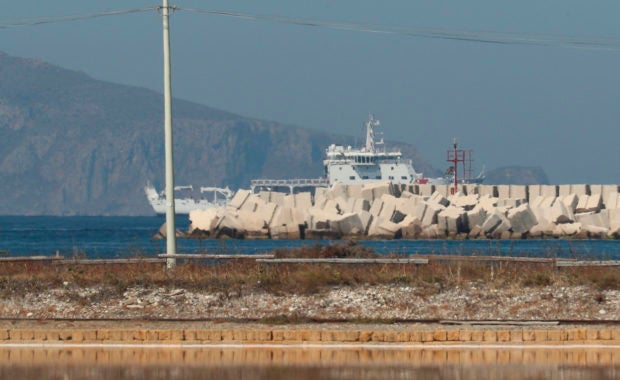 The Diciotti ship of the Italian Coast Guard, with 67 migrants on board rescued 4 days ago by the Vos Thalassa freighter, waits to enter the Sicilian port of Trapani, southern Italy, Thursday, July 12, 2018. The top security officials of Germany, Italy and Austria are touting their hard line on migration issues, saying Europe needs to protect its exterior borders and crack down on human smuggling. (Igor Petyx/ANSA via AP)

Innsbruck, Austria — France has taken in a group of 78 asylum-seekers, mainly from Eritrea and Sudan, after their charity rescue ship was blocked form ports in Italy and Malta.

The French Interior Ministry said the group arrived in France on Thursday from Spain, where the Aquarius rescue ship that saved them was allowed to dock last month.

The ministry said the 78 were identified as in need of protection as refugees and will be housed in regions in southeast and northern France while they go through the asylum process.

France has taken in a much smaller share of migrants in recent years than neighboring Germany or Italy.

An Italian coast guard ship is in the waters off Sicily awaiting permission to disembark its 67 migrants, some of whom are accused of mutiny and threatening their rescuers if they were taken back to Libya.

Interior Minister Matteo Salvini has vowed to identify, jail and prosecute the “criminals” rescued over the weekend by a commercial tugboat off Libya. Transport Minister Danilo Toninelli has said a few of the migrants made death threats against the tug’s crew, apparently fearing they would be returned to Libyan detention centers.

The tug alerted Italian authorities to the threats, and the migrants were transferred to the coast guard ship Diciotti, which remained off the coast of Trapani on Thursday.

On Trapani’s docks were activists protesting Italy’s hard-line position on migrants. Many wore the red T-shirts that have become a symbol of those favoring a broader welcome for migrants, many of whom dress their children in red to make them easier to spot in cases of shipwreck.

The top security officials of Germany, Italy and Austria are touting their hard line on migration issues, saying Europe needs to protect its exterior borders and crack down on human smuggling.

Seehofer says the ministers, all hardliners on migration, are seeking European solutions, but “all three of us know that this is going to be a Herculean task.”   /vvp