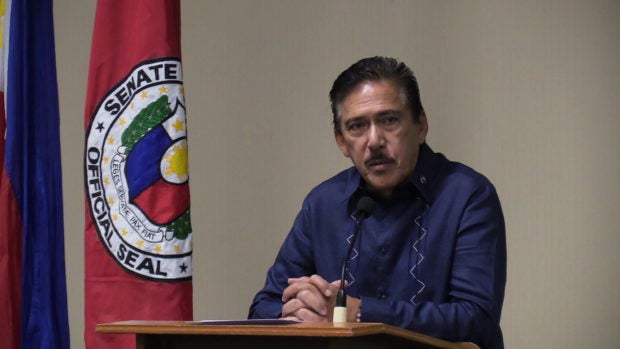 Postponing next year’s midterm elections for a smooth transition to a federal system is not as simple as Speaker Pantaleon Alvarez makes it out to be, Senate President Vicente Sotto III said on Wednesday.

“That can only be possible if we will be able to amend all pertinent laws mandating elections on the second Monday of May every three years,” Sotto said in a text message to reporters.

“The question is, are we willing to do that?” he added.

Asked to answer his own question, he said: “Ask me another.”

Sotto was reacting to the statement of Alvarez on Wednesday that it might be “practical” to postpone next year’s midterm elections to ease the proposed transition to federalism.

The consultative committee tasked by President Rodrigo Duterte to propose amendments to the 1987 Constitution submitted a draft federal charter to the House of Representatives on Wednesday.

Alvarez told reporters after the submission that it was “difficult to say” if the midterm elections would be held.

“It depends on what we want to give priority,” he said.

Sotto, however, said not holding elections next year would require an amendment to the 1987 Constitution — the same job that the consultative committee headed by former Chief Justice Reynato Puno was doing for a change to a federal system of government.

“It’s difficult because we have to amend the Constitution to do that,” Sotto said, citing Section 8, Article VI of the Charter: “Unless otherwise provided by law, the regular election of the senators and the members of the House of Representatives shall be held on the second Monday of May.”

Asked when he would meet with Alvarez to discuss the elections, Sotto said: “Ask him.”

Alvarez said the House was facing crunch time on its planned constituent assembly (Con-ass), which would hammer out the final text of a proposed federal Constitution that would be submitted to a national referendum.

“If we want to finish this, we should make time in the timetable,” he said.

The House has scheduled committee deliberations on the 2019 national budget beginning July 31, which means its version of the budget law could be passed by September at the earliest.

But the filing of certificates of candidacy is in October, effectively ushering in the 2019 election period and, to be sure, keeping lawmakers up for reelection busy preparing for the  campaign.

“How will we have a quorum? Of course, the congressmen would be campaigning. That’s elections, survival,” Alvarez said.

The draft Charter submitted by the Puno committee to the House on Wednesday was not a finished document, as the 22-member body sat down again to write a provision requested by the President that would bar him from running for a fresh term under the proposed federal government and authorize elections for the selection of transitional leaders that he would not contest.

The President requested the provision to quash speculation that the draft charter was designed to enable him to stay in power beyond 2022, the end of his six-year term.

“After the new Constitution is ratified, the President shall call … [elections for] the transitory president and transitory vice president,” Puno told reporters on Wednesday.

“They’ll be the ones to see to it that the shift to the federal government will be as smooth as possible,” he said.

Puno said the committee recommended the inclusion of the transitional vice president, the incumbent Senate president and Speaker of the House and the four living former Presidents as ex-officio members of the proposed transition commission.

“This commission shall prepare the transition plan,” Puno said.

He said Vice President Leni Robredo would not be barred from running for transitional president or vice president.

Senators and House members whose terms will end in 2022 will stay in office in holdover capacity until general elections for the proposed federal government can be held, he said.