PDEA: Pols on narcolist down to 87 | Inquirer News

PDEA: Pols on narcolist down to 87 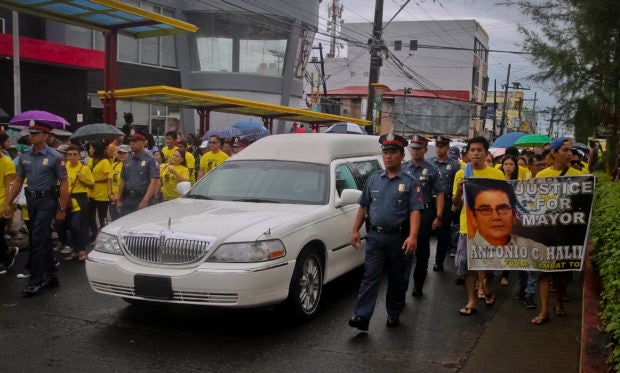 NOT NARCOPOLITICIAN Supporters join the funeral of Mayor Antonio Halili of Tanauan, Batangas province, on July 8. His family protests the narcopolitician tag on Halili, but the PDEA
insists it has valid information on the mayor. —KIMMY BARAOIDAN

The Philippine Drug Enforcement Agency list of “narcopoliticians” has been trimmed to 87 from 96 by the killing last week of a mayor and the removal from the roll of people who have left public office or died, the PDEA said on Wednesday.

Mayor Antonio Halili of Tanauan City, Batangas province, was killed by a sniper on July 2. He was on the narcolist, according to PDEA Director General Aaron Aquino.

Mayor Ferdinand Bote of General Tinio, Nueva Ecija province, and Vice Mayor Alexander Lubigan of Trece Martires, Cavite province, were also slain in brazen assaults last week, but Aquino said they were not on the narcolist.

Nine former politicians were removed from the list after they left public office or were killed or died “natural deaths,” Aquino said.

Aquino told a news briefing that the killings of Bote and Lubigan were likely carried out by people “taking advantage” of the slaying of Halili to pass the blame on the government.

President Rodrigo Duterte has faced criticism from local and international human rights groups for his take-no-prisoners war on drugs.

Thousands of small-time drug users and pushers have been killed by police and unknown assailants since he launched the crackdown after taking office in 2016.

Later that year, Mr. Duterte disclosed a list of politicians allegedly involved in the illegal drug trade. Two mayors on that list had been killed in police raids and one had fled the country.

Last week’s killings drove  the country’s mayors and vice mayors to seek an audience with Mr. Duterte, but no meeting had been set with the leader who promised to kill tens of thousands of criminals and dump their bodies in Manila Bay to fatten the fish.

Asked whether the narcopoliticians were being targeted, Aquino replied: “I don’t think so. Otherwise, if that were the case, then a lot [more people] would already be dead.”

“These assassins who have been planning to kill these [local executives], they’re doing it right now because it will project as if it’s a state-sponsored killing… We will get blamed when, in fact, they’re just taking advantage of the situation to do it,” he said.

“Who have been killed who was on the narcolist? It’s only Halili.  The other two—Bote and Lubigan—what’s surfacing is that they were politically motivated killings,” he said.

Police earlier said that investigators were looking at politics as a possible motive for the attack on Lubigan, as the vice mayor told people close to him the day before he was killed that he planned to run for mayor in next year’s midterm elections.

Investigators said business could be a motive for the killing on Bote, although they were not ruling out politics in the attack on the mayor.

Despite protest from Halili’s family, Aquino maintained that the PDEA based its findings on “a four-agency task force validating the real [situation] on the ground.”

The agencies, he said, are the PDEA, Philippine National Police, Armed Forces of the Philippines and National Intelligence Coordinating Agency.

“All have information on Mayor Halili,” he said.

“[Halili was] connected with a drug group. We are investigating it deeper, although we already have identities of that drug group. And there are some linkages also to some politicians in Central Luzon,” Aquino said.

Of the 87 remaining on the list of narcopoliticians, Aquino said the PDEA had already “revalidated” the involvement in drugs of three—two congressmen and a mayor. —WITH REPORTS FROM JULIA ORNEDO AND ANDREA ALCARAZ