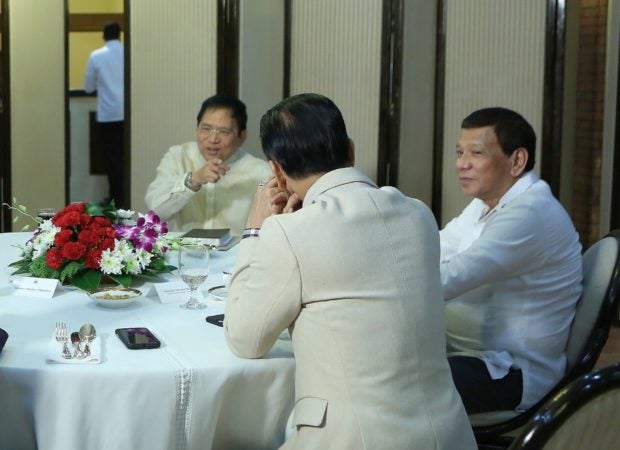 As he reeled from public backlash over his rant against God, President Rodrigo Duterte said he had apologized to the Almighty soon after realizing his mistake.

The President told Christian evangelist Bro. Eddie Villanueva on Tuesday night in Malacañang that he said sorry to God immediately after calling him “stupid,” which sparked public outrage and prompted a day of prayer for Catholics.

“If we have the same God, I’m sorry, that’s how it is. Sorry, God. I said sorry God — if God is taken in a general term by everybody listening, then that’s well and good,” the President told Villanueva during their two-hour meeting.

Malacañang released a video of the meeting on Wednesday, days after Villanueva demanded that the President publicly apologize to God, otherwise the Lord’s wrath would come upon the country and Filipinos.

“From his remarks after the meeting, Bro. Eddie Villanueva seemed elated [about] the outcome of his dialogue with the President. The video released by Malacañang is self-explanatory,” chief presidential legal counsel Salvador Panelo said on Wednesday.

Villanueva, founder of the Jesus Is Lord movement, did not respond to Inquirer’s requests for an interview.

Joining the President and Villanueva at their table at Malago Clubhouse in Malacañnang Park were Panelo, who arranged the meeting, special assistant Christopher Go and Villanueva’s cousin, lawyer Angelino Villanueva.

Until recently, the President  balked at apologizing for his “stupid God” remark during a June 22 rambling speech in Davao City, which took aim at the biblical story of the creation and questioned God’s wisdom in creating Adam and Eve only to let them fall from grace.

“I will not do that (say sorry). Definitely not in a million years,” he told vice mayors in Panglao, Bohol, late last month. “You know God is personal. It is not formed by textbooks.”

The President also met with Davao Archbishop Romulo Valles on Monday afternoon, a few hours after the Catholic Church leader called for a day of prayer on July 16 for people who had blasphemed God and murdered their fellowmen.

Valles also called on Catholics to join the bishops for three days of fasting and abstinence from July 17 to 19.

In his meeting with Valles, the 73-year-old leader agreed to “a moratorium on statements” against the Church. The next day, he dished out stinging words against his critics from the Church, but he later denied attacking the institution.

The President’s dialogue with religious leaders had long been planned following his attacks on the Church over abuses of priests that some perceived as a response to the Church’s criticism of his brutal crackdown on drugs.

The dialogue became urgent in the wake of public outrage over his rant in the largely Catholic nation, which several religious leaders—including Villanueva—called blasphemy.

In the meeting, Villanueva read a prepared statement where he felt that “the President should apologize not to the people nor to the religion but to God,” according to Panelo.

The President told Villanueva that he did apologize to God, said the chief presidential counsel.

“Immediately after I made those remarks and said to God,  ‘Sorry God,’” Panelo quoted the President as telling Villanueva.

In the video, Villanueva asked whether the President made an immediate apology to God. To which, the President replied: “Yes, of course.”

The President, however, drew the line at apologizing to the public.

“But I only apologize to God, nobody else. If I wronged God, he would be happy to listen. Why? Because my God is all forgiving. Why? Because he does not remember past hurts. Why? Because God created me to be good and not to be bad,” he said in the video.

The President also explained that he made the remarks in response to Australian missionary Patricia Fox, who faced deportation over allegations of violating the terms of her visa by joining political rallies.

“You go on strikes and I said my God is a good God. He doesn’t thrive on lies and never egg people to go into trouble,” he said, without naming Fox.

Villanueva thanked the President for his explanation as “he and other Christian groups misunderstood him,” Panelo said.

Villanueva prayed over they President and they both prayed earnestly, he said.