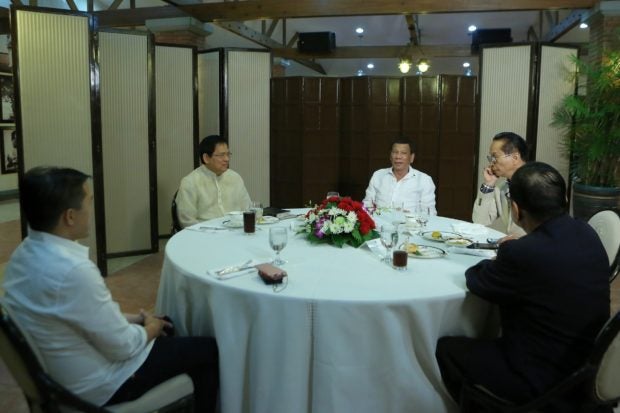 President Rodrigo Duterte discusses matter with Jesus Is Lord Church Worldwide (JILCW) Founder and President Eduardo Villanueva during a meeting at the Malago Clubhouse in Malacañang Park on July 10, 2018. Joining the meeting are Sec. Bong Go of the Office of the Special Assistant to the President, Chief Presidential Legal Counsel Salvador Panelo, and Atty. Angelino Villanueva. Presidential photo

Move on but continue to pray for President Rodrigo Duterte’s “continued enlightenment.”

Senator Panfilo Lacson said this on Wednesday as he and Senator Joel Villanueva welcomed Duterte’s apology after his scathing remarks against God.

“I can only thank God for enlightening our President to make that humble apology,” Lacson said in a text message.

“It shouldn’t matter much if it was my God or his God he is apologizing to because there is only one God of the universe anyway,” Lacson added.

The senator expressed confidence that “firm God believers” like him supporting Duterte’s presidency could now “get over with the dilemma of whether or not to continue supporting his leadership.”

“We can now move on while praying for his continued enlightenment,” Lacson added.

For his part, Villanueva said he was “glad” that the President has already apologized to the public.

“Only the Lord, our God, can judge our sincerity,” Villanueva said in another text message.

“Moving forward, I hope the President can lead us towards greater unity and respect for one’s faith and religion and to focus all energy on policies that can uplift the nation,” Villanueva said.

Duterte issued the apology to God during his meeting with Villanueva’s father, evangelist Bro. Eddie Villanueva, on Tuesday night.

It was Bro. Eddie, who earlier asked the President to publicly apologize after the latter called God “stupid.”

“If it’s the same God, I’m sorry, that’s how it is. Sorry, God. I said sorry God. If God is taken in a generic term by everybody listening then that’s well and good,” Duterte said in a video posted by the Presidential Communication Operations Office (PCOO) on its Facebook page. /jpv