Duterte: I believe in God, but prove his existence – via a selfie | Inquirer News
Close
menu
search

Duterte: I believe in God, but prove his existence – via a selfie 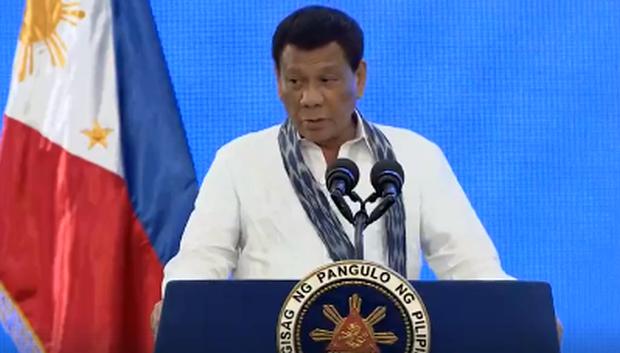 President Rodrigo Duterte speaks at the opening of the National Science and Technology Week (NSTW) Celebration in Mindanao at the SMX Convention Center in Lanang, Davao City on Friday, July 6, 2018. (Photo from an RTVM video)

President Rodrigo Duterte says he’s neither an agnostic nor an atheist. He believes in God. But he has a challenge: If anyone can to prove to him that God exists – by showing him a selfie with the Creator – he will resign.

“By the way, I believe in one Supreme God. I never said I do not believe in God. I am not agnostic. I am not an atheist. I just happen to be a human being believing there is a universal mind somewhere which controls the universe,” he said during the opening of the National Science and Technology Week in Davao City Friday.

“So I do not believe in God? Yes, of course there is God,” he added.

Duterte, however, said he would want somebody to show up and say he had gone to heaven and come down to earth to prove the existence of God.

“Bring me one person, just one, who would say, ‘Mayor, those silly guys from the Church told me to go to heaven and talk to God. There is really God. Here, we have a picture, I bought a selfie’,” he said in Filipino.

“You do that today, one single witness that there is a guy, a human being who was able to talk to see God,” he added. “Of the so many billions who had been on here [on earth], I just need one. And if there is one, ladies and gentlemen, I will announce my resignation immediately.”

The President also refuted the concept of original sin, which came about because, as related in the Bible, Adam and Eve were banished from Eden for disobeying God.

READ: Bro. Eddie: Duterte’s ‘blasphemy’ could bring curses on himself and country

“So where is the logic of God there? You create the perfect thing and then spoil it with a snake and an apple and you give us a sin that we never agreed to commit and that is the original sin,” he said.

The President also attacked the Church for collecting funds from the people to “maintain the palaces and the luxurious things that the rest of humanity do not have.”

He has made similar statements on God and Creation before, which draw flak from several personalities in religion and politics.

Last week, the President was slammed, including by some of his political allies, for calling God “stupid” in another speech, with one Catholic bishop calling him a “psychopath.”

The President lamented in that speech that Adam and Eve’s sin in Christian theology resulted in all the faithful falling from divine grace.

“Who is this stupid God? This son of a bitch is then really stupid,” he said last week. “You were not involved but now you’re stained with an original sin … What kind of a religion is that? That’s what I can’t accept, very stupid proposition.”

Sen. Antonio Trillanes IV, one of the President’s archcritics, shot back at the President by describing him as “one evil man” and his remarks as “very much consistent with the deceitfulness, heartlessness and ruthlessness of his policies.”

Presidential spokesperson Harry Roque has defended his remarks, saying the President had the right to express his opinion on religion and cited the President’s previous disclosure that he was once sexually abused by a priest.

On Friday, the President recalled that experience, when he said he and other students were fondled by a foreign Jesuit priest, who had since died.

Amid the criticisms, officials arranged a meeting, set for Monday, between the President and the Davao Archbishop Romulo Valles, president of the Catholic Bishops’ Conference of the Philippines (CBCP).

Bishops opened an annual conference in Manila on Saturday and were expected to address the President’s tirades when they conclude their meeting on Monday. –With a report from AP