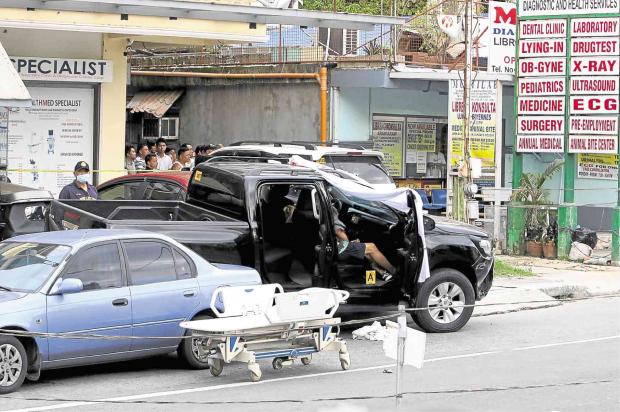 A piece of cloth shrouds the front passenger section of the pickup truck and the bullet-riddled body of Trece Martires City Vice Mayor Alexander Lubigan. (Photo by RICHARD A. REYES / Philippine Daily Inquirer)

Alexander Lubigan, 44, was with his driver-bodyguard Romulo Guillemer and security aide Romeo Edrinal when the gunmen blocked the path of his black Toyota Hi-lux pickup truck and opened fire around 3 p.m. in front of Korea-Philippines Friendship Hospital on the Trece Martires-Indang Road at Barangay Luciano in the province’s capital.

Edrinal, 56, survived and was being treated in the city’s Korea-funded hospital.

Lubigan, who ran in the 2016 elections under the United Nationalist Alliance, was on his third term as vice mayor.

“We ask the leadership of the Philippine National Police to conduct a fair investigation and spare no effort in getting to the bottom of this latest crime,” presidential spokesperson Harry Roque said in a statement.

“We must band together and put an end to the worrisome incidents of violence involving local politicians,” he added.

On Monday, Halili was shot dead by a sniper during flag-raising rites at Tanauan City Hall, while Bote was ambushed the next day by motorcycle-riding gunmen as he left the National Irrigation Administration compound in Cabanatuan City in his sport utility vehicle.

At least 10 town and city mayors have been killed since President Duterte took office in June 2016.

Halili, who was included in the Philippine Drug Enforcement Agency’s list of “narcopoliticians,” was stripped of supervisory powers over the local police amid allegations he was involved in the drug trade.

Sen. Panfilo Lacson, a former chief of the PNP and a friend of Halili, called on the authorities to “bring the bastards responsible [for the three local officials’ deaths], including their masterminds before the bar of justice.”

“Let’s hope and pray that the successive killings of elected officials are not symptomatic of a bloody midterm election next year,” he said.

In a radio interview also on Saturday, Lacson said Halili had told him that he was worried he might go up against a retired general in next year’s elections.

Cavite Gov. Jesus Crispin Remulla said in a phone interview that Lubigan was on his way to a gym when the gunmen struck.

“[I’ve] never heard of any adverse behavior from him,” Remulla said of his “good friend” Lubigan.

Trece Martires City Mayor Melandres de Sagun, a party mate of Lubigan, was on leave abroad, according to Remulla who signed the mayor’s travel documents two weeks ago.

Supt. Chitadel Gaoiran, spokesperson for the Calabarzon police, said investigators were primarily looking into politics as the motive of the killing. He did not elaborate.

The brazenness of the killings have increased anxieties among elected public officials who now fear for their lives when they venture out of their homes, according to Union of Local Authorities of the Philippines (Ulap).