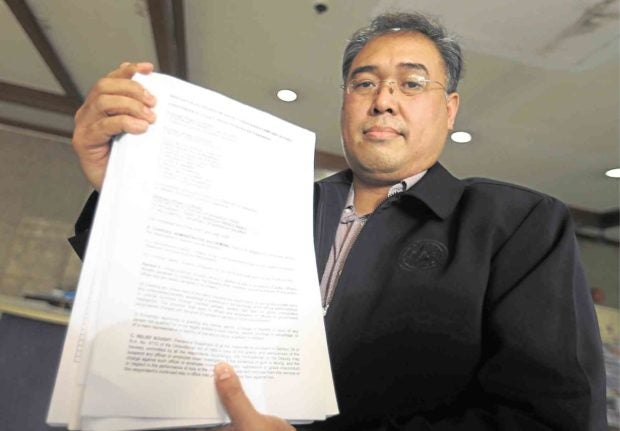 The Department of the Interior and Local Government (DILG) on Wednesday filed a complaint against Aklan Gov. Florencio Miraflores and 16 local officials for their alleged negligence in the management of Boracay Island.

Undersecretary Epimaco Densing III on Wednesday filed the complaint in the Office of the Ombudsman over the officials’ alleged laxity in the issuance of building permits and their alleged failure to address illegal development activities on the resort island in Malay town.

Densing, however, did not release to reporters a copy of the complaint.

The complaint was filed as the six-month rehabilitation of the island entered its third month.

President Rodrigo Duterte ordered the closure of Boracay to tourists on April 26, several weeks after he called the island a “cesspool” due to its environmental problems arising from congestion and overdevelopment.

Miraflores on Wednesday said he had not seen or received a copy of the complaint.

“We will respond to the complaint accordingly and we are confident that we can prove that we are not liable for the allegations against us,” he told the Inquirer in a telephone interview.

Cawaling did not respond to calls made by the Inquirer on Wednesday. In an earlier interview, however, he said he was ready to face any charges.

The mayor said he did not neglect his duties but admitted that the needs and problems of Boracay required intervention and help from the national government.

Densing said Miraflores would only face an administrative complaint for gross neglect of duty.

A complaint for violation of the Anti-Graft and Corrupt Practices Act was filed against Cawaling, Talabero, Sancho, Salsona, Casidsid, Gabay and Sacapaño.

Graf, chair of the council’s committee on environment and president of the business group Boracay Foundation Inc., said she was “shocked and saddened” that she was among those charged.

“I have fought for the environment and had appealed for government action on our environmental problems even when I was in the private sector. My record here can speak for itself,” she told the Inquirer.

Densing sought the preventive suspension of the officials pending the Ombudsman’s investigation of their liabilities.

Densing told reporters that the Malay officials neglected their “oversight functions” in the “implementation of their municipal ordinances.”

He said mayor’s permits were issued to developers “even if the documents [were] lacking.”

Densing faulted the village chiefs of Boracay for allowing establishments without mayor’s permits to operate.

Densing said “almost half” of the 2,269 establishments inspected in Boracay lacked mayor’s permits. Only 95 were “fully compliant” with licensing requirements, he added.