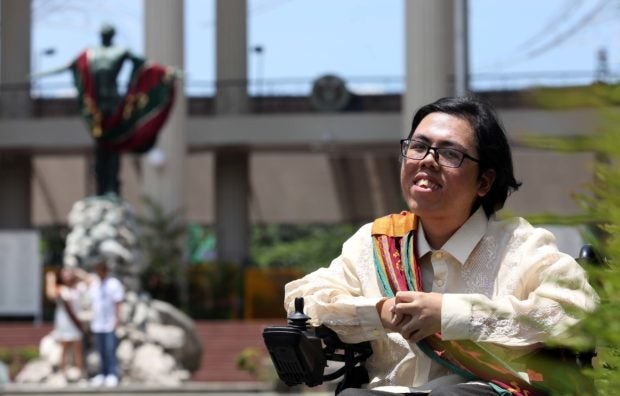 In the sea of some 4,600 graduates of the University of the Philippines (UP) Diliman on Sunday, Alexander Michael Bautista easily stands out, and not just because he uses a wheelchair.

Graduation for this business administration major marks another win against seemingly endless odds that started when he was 2 and diagnosed with spinal muscular atrophy (SMA), a rare neuromuscular disorder with no known cure that affects control of muscle movement.

But Miggy, as friends and family call him, was not one to be defined by limitations.

But like raising a child, it takes a village — in this case, the entire UP community — to literally carry Miggy through his academic journey.

It certainly helped that his parents, Gabriel and Soledad, were very hands-on in their support.

The couple had perfected their four-year routine: Wake up as early as 5 a.m. and travel for around two hours from their home in Tanay, Rizal province, to get their son to school in Quezon City, carry Miggy to the car, transfer him to the wheelchair, and wheel him to his classes in different buildings inside the UP campus. 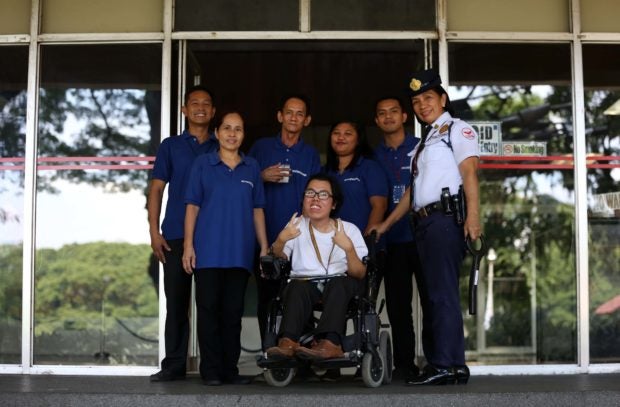 IT TAKES A VILLAGE As he made his academic journey, AlexanderMichael “Miggy” Bautista was literally carried to class by his father Gabriel (indark shirt) with the help of University of the Philippines Diliman teachers, security guards, maintenance personnel and even the campus “sorbetero” (ice cream vendor). —PHOTOS BY LYN RILLON

“In the absence of facilities for persons with disabilities (PWDs), we gained many friends instead,” said Soledad, who admitted being hesitant to ask for help in the beginning.

“But we felt everyone’s compassion,” Gabriel said. “We were never ignored when we asked, although Miggy was also not treated as if he needed special attention.”

Security guards, utility and maintenance personnel, teachers and even a passing “sorbetero,” helped out, carrying Miggy and his wheelchair up and down the stairs.

Gabriel said some people even mistook him and his wife for Miggy’s driver and caretaker, respectively. After all, they took their son to all his classes, meetings and social events daily, and waited until he was done so they could take him home. 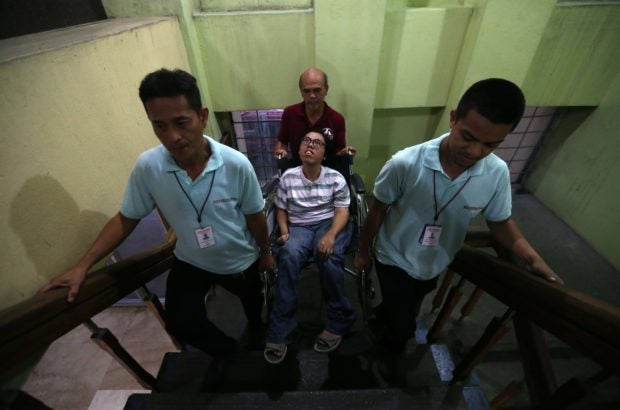 “We know that if we did not love our son as much, we would not have the strength to do it all,” he said.

The Bautista couple, however, admitted that their routine also led to bouts of frustration and burnout, as they juggled their time between earning a living and taking care of Miggy and his two younger siblings. But faith and trust in God pulled them through, Soledad said.

In some ways, the couple felt that they too would be graduating with Miggy. As they waited for their son’s classes to end, they would attend conferences, lectures and seminars at UP Diliman to make good use of their time.

“We even attended rallies and learned about social issues and human rights,” Soledad said. “We learned the stories of the vendors and several students we met. We really feel as if we were part of the UP community.”

The community too welcomed them as its own.

Nelia Hermogino, a security guard at Virata School of Business (VSB) for 15 years, said she felt like Miggy’s second mother, memorizing his class schedules and ensuring that he had company whenever he came in and out of the building.

By his fourth year, however, Miggy was already making independent trips from one building to another on his motorized wheelchair. On her two-way radio, Hermogino would receive information about his solo trip from the guard next door.

“VSB lobby, our student is on the way,” the guard would say.

“Copy,” Hermogino would reply, ready to welcome Miggy back.

Miggy acknowledged the others who helped him out, easily dropping their names like they were as familiar as family: Vic, Arnold, Dado, Ferds, Rex, Jess, Cora and Nitz, among others.

Professors and school administrators, including UP Diliman chancellor Michael Tan, also kept their eyes on Miggy from Day One of his stay in the university.

Dr. Ivy Suan, VSB’s undergraduate program director, recalled that Tan formally wrote to them when Miggy decided to shift to a business course from political science.

“On the first day of every semester, we would check his classes and make sure they were located or transferred to the first floor,” Suan said. VSB has an elevator, but it did not function for the duration of Miggy’s stay in college.

“His main challenge was his mobility. We did not see any issue in his classes, where he excelled as a group leader,” Suan said.

Miggy said his years in UP not only taught him patience and perseverance; they also made him realize the privilege that allowed him to continue his studies.

Not one to waste any opportunity, he joined school competitions and business ventures and even organized a financial literacy talk for PWDs in Cainta, Rizal.

Even in his limited capacity, Miggy said he was still able to experience being an Iskolar ng Bayan. Through his cheerleading class, he attended several University Athletic Association of the Philippines games, along with his parents who cheered beside him. Like most UP students, he ate isaw (barbecued chicken intestines) from Mang Larry’s though he had it to-go, since the famed grilling spot was inaccessible.

But Miggy also confessed to sometimes feeling discouraged at not being able to move more independently. “My parents and I were always tied together,” he said.

Lately, however, Miggy had been allowed to do things independently despite his mother’s constant worry. He was allowed to go with a friend to the UP Fair in February and his college’s graduation ball just recently, where  classmates recalled him partying hard and spinning gleefully in his wheelchair.

Praising Miggy’s tireless efforts and those of his parents, UP Diliman’s vice chancellor for student affairs Jerwin Agpaoa recognized that there was more to be done to help other students with disabilities in campus, as well as future UP scholars who may have limited abilities.

In partnership with the College of Education, Agpaoa said he and Tan formed an ad hoc committee that would “craft policies that would constitute accessibility for students.”

Said the school official:  “Physical barriers are easier to address; what everyone has to contend with is people’s attitude toward those with disabilities.  We have to build a campus that is highly sensitive to the needs of students with disabilities.”

But his experiences at the university are enough to make him feel very optimistic about his future, said Miggy who said he plans to be a lawyer someday. But for now, he added, he wants to use what he had learned in business school and work in a corporate setting.

As he shifts his “sablay” (graduation sash) today to symbolize the culmination of his UP journey, Miggy said he hopes to embody the values of honor and excellence that the university espouses.

“I believe service is not a question of capability but of will, mind and heart,” he said. “Even if my disability sometimes barred me from doing some things, it did not stop me from being the UP student that I want to be.”