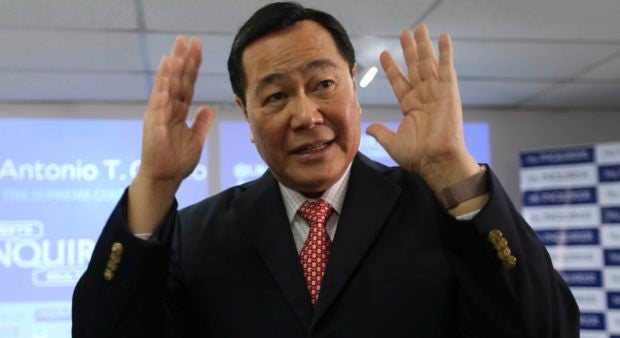 Antonio Carpio, the most senior of the 14 justices on the Supreme Court, won’t use Maria Lourdes Sereno’s misfortune to climb to the top of his legal career.

Carpio, who has taken over the judiciary’s leadership as acting Chief Justice, on Wednesday said he would reject all nominations for him to succeed Sereno, after the Supreme Court made permanent its decision driving her out as the country’s top judge.

He also insisted that it was unconstitutional for the Supreme Court to expel any of its members through a quo warranto petition, the legal action brought by Solicitor General Jose Calida to get rid of Sereno, who had earned President Rodrigo Duterte’s ire for defending the judiciary’s authority to discipline erring judges.

“Because I have voted against it, I don’t want to benefit from it. So I will decline any nomination,” Carpio said in a television interview.

“I have to be consistent with my position that the quo warranto is not the proper way to remove a sitting member of the court,” he explained. “But I will have to implement it because I’m the temporary head of the institution.”

Carpio, who retires from the judiciary in October 2019, joined five other magistrates in opposing the decision of eight of their colleagues that Sereno should be removed as Chief Justice due to her failure to present all her financial records before her appointment in 2012.

On Tuesday, the high court affirmed its controversial ruling with finality, an act that also officially started the 90-day period for the President to name Sereno’s successor.

The political opposition to the President is considering bringing a motion for reconsideration of the decision, but the chief presidential legal adviser, Salvador Panelo, said on Tuesday that the court’s final ruling should be the end of the case.

“It behooves everybody to respect and bow to the majesty of the law. Dura lex sed lex (the law may be harsh, but it is the law),” Panelo said.

In an earlier interview, Carpio said he did not mind if his criticisms of the President’s policy on the territorial dispute with China in the South China Sea would dash his hopes of becoming Chief Justice of the Philippines.

“That’s far more important than the presidency. The President can come and go, but our sovereignty stays with us,” he added.

As mandated by the Constitution, Carpio said the Judicial and Bar Council (JBC) would have to submit a list of applicants for Chief Justice to the President.

After serving the government in various capacities for over three decades, he said he no longer “hanker[ed] for any position.”

Amid the increased public interest in the authority that a Chief Justice wields, Carpio said that the Chief Justice being the  highest judicial officer did not mean other members of the Supreme Court would always agree with him or her.

“You’ve seen it. They will follow you if your ponencia (opinion) is correct, convincing. That’s when they’ll follow you. Not just because you’re the Chief Justice,” he said.

Carpio, appointed to the Supreme Court in 2001 by then  President Gloria Macapagal-Arroyo, did not find anything wrong with tapping a young justice to head the government’s judicial branch.

He said: “You may be young, but you may get along with people. I think that’s OK.”

Sereno’s appointment as Chief Justice in 2012 by then President Benigno Aquino III was questioned by several senior justices on the Supreme Court. She was then 52 and had served on the tribunal for only two years.

The full Supreme Court has recommended Court Administrator Jose Midas Marquez and three others to replace Associate Justice Presbitero Velasco Jr., who will retire next month, according to two court sources.

Marquez, who openly supported moves to unseat Sereno, was joined on the list by Court of Appeals Associate Justices Rosmari Carandang, Jose Reyes and Ramon Garcia. —WITH A REPORT FROM CHRISTINE O. AVENDAÑO