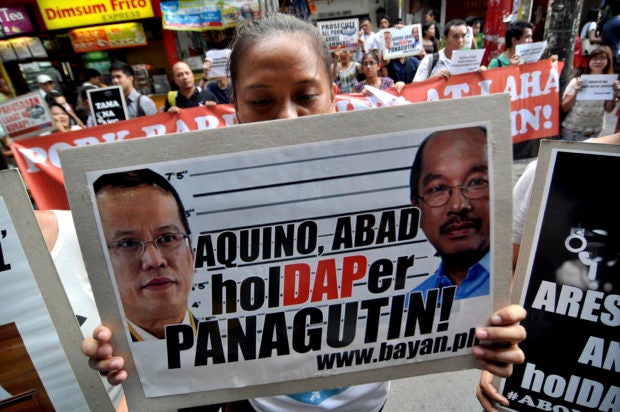 PROTEST AGAINST DAP Militants condemn the Disbursement Acceleration Program approved by then President Benigno Aquino III and and carried out by his budget secretary, Florencio Abad, during a 2014 rally on Taft Avenue in Manila. —RICHARD A. REYES

Morales, in a June 14 resolution made public on Wednesday, partially granted the appeal of activists led by Bayan Muna Rep. Carlos Isagani Zarate who questioned her March 3, 2017, decision that cleared Aquino of criminal liability in connection with the economic stimulus program that had been stricken down by the Supreme Court as unconstitutional.

The Ombudsman said it found Aquino liable for usurpation of legislative powers under Article 239 of the Revised Penal Code after a “reevaluation of the case.”

She said Aquino and Budget Secretary Florencio Abad showed a “joint purpose and design to encroach on the powers of Congress by expanding the meaning of savings to fund programs, activities and projects under the DAP.”

If convicted by the Sandiganbayan, Aquino and Abad could face six months to six years imprisonment.

Sought for comment, Abigail Valte, Aquino’s spokesperson, said the former President’s camp had not yet received a copy of the Ombudsman’s resolution.

“We’re quite curious to study how the [Ombudsman] arrived at a reversal of its previous decision finding no liability on the part of former President Aquino,” Valte said.

The Liberal Party (LP) said Aquino would respect the legal process and defend his actions.

“The DAP was crafted with the intention to deliver the services and infrastructure needed by the people and guided by the laws available to the executive. This is why former President Aquino gave his nod to the program,” the LP said in a statement.

It said Aquino would show that he did not do anything illegal, before all the courts and up to the very end of the process.

Abad said: “We respect the decision of the Ombudsman and will make preparations accordingly.”

Last year, the Ombudsman found probable cause to order the filing of charges against Abad over the DAP.

In the June 14 resolution, Morales denied Abad’s motion for reconsideration.

Morales resolved the case barely a month before retiring on July 25, seven years after Aquino appointed her as Ombudsman, or graft buster.

The Ombudsman said Abad could not be solely held liable for the DAP because National Budget Circular (NBC) No. 541  “would not have been issued” without Aquino’s approval.

The resolution cited Aquino’s marginal notes that “specified his unqualified approval” of Abad’s June 25, 2012, requests for authority to consolidate and realign unused funds, and withdraw the balances of slow-moving expenditures.

The Ombudsman rejected Aquino’s claim that he was merely relying on his subordinate’s technical expertise.

“Such marginal notes show meaningful discussion between respondents and not mere reliance of a superior on a subordinate,” the resolution said.

It stressed that Aquino had the authority and the duty to look into each item in Abad’s memorandum before approving it.

“His approval prompted the issuance of NBC 541, which directed the withdrawal of unobligated allotments and unreleased appropriations and their declaration as savings, which is contrary to law,” it said.

The criminal complaint was filed by activists including Zarate, Bagong Alyansang Makabayan secretary general Renato Reyes, Volunteers Against Crime and Corruption chair Dante Jimenez, social activist Mae Paner and six others on July 8, 2016, a week after Aquino completed his term and lost his presidential immunity.

In fighting the complaint, Aquino argued that the Supreme Court decision to strike down the DAP could not be used against him because it held the “authors, proponents and implementers” in good faith.

He also denied encroaching on Congress’ powers and argued that Article VI, Section 25(5) of the Constitution empowered the President to augment insufficient budgetary items.

Although the usurpation case would push through, the Ombudsman did not find enough basis to order Aquino and Abad’s indictment for the complaint of graft and technical malversation.

Those charges did not prosper because Aquino and Abad were deemed to have been in good faith when they started the program to accelerate government spending and spur economic growth.

They were also not deemed  the “accountable officers” who had actual custody of the funds, an element required for them to be charged with technical malversation—defined as the use of funds for purposes other than those they were appropriated for.

Sought for comment, Zarate and Reyes expressed mixed feelings because their appeal — filed through the National Union of People’s Lawyers — was not fully granted by the Ombudsman.

Zarate said he welcomed the Ombudsman’s resolution, but insisted: “They should be indicted as well for technical malversation and graft charges as both author and architect of the multibillion presidential pork barrel called DAP.”

Reyes said: “We would have preferred that our motion for reconsideration be granted in full, with malversation included in the charges.”

“We welcome the new findings just the same. We hope that there will truly be accountability in this issue,” he added. “We intend to see it through to its logical conclusion so that justice may be served.”

Aquino can still appeal Morales’ order. But if his appeal  fails, the DAP charges would be his second criminal case to reach the court.

On June 13, 2017, Morales found probable cause against Aquino for usurpation of authority and graft in connection with the Jan. 25, 2015, Mamasapano massacre because he tasked Philippine National Police Director General Alan Purisima to head the operations to capture an international terrorist despite being under suspension at the time.

The Mamasapano case  reached the Sandiganbayan on Nov. 9, 2017. But the Supreme Court, on Feb. 7, suspended the proceedings, after the Duterte administration questioned the Ombudsman’s decision to prosecute Aquino for a less serious offense instead of reckless imprudence. —With reports from Leila B. Salavarria and Christine O. Avendaño