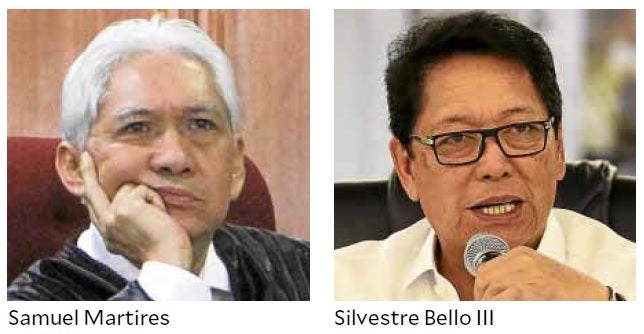 A group of clergymen is opposing the bid of Supreme Court Associate Justice Samuel Martires to succeed Ombudsman Conchita Carpio Morales for his refusal to inhibit himself from the tribunal’s deliberations on the quo warranto petition that led to Maria Lourdes Sereno’s ouster as Chief Justice.

The group — composed of Catholic priests, pastors and theologians — also said on Monday that Martires showed “blatant lack of respect for faith-based communities” when he raised “patently biased” questions during the high court’s proceedings on April 10 in Baguio City.

Another candidate for the top post in the Office of the Ombudsman is also facing an obstacle.

Labor Secretary Silvestre Bello III has criminal and administrative cases pending in the Office of the Ombudsman.

The cases could affect the aspirations of Bello, who on May 16 publicly told President Rodrigo Duterte: “Make me the Ombudsman.”

Asked about Bello’s cases, Justice Secretary Menardo Guevarra, a Judicial and Bar Council (JBC) member, pointed out that “there’s a JBC rule that disqualifies an applicant if at the time of JBC deliberations on his application, his case is still pending in the OMB.”

He was referring to Rule 4, Section 5 of the Rules of the JBC, which disqualifies individuals “with pending criminal or regular administrative cases” from being nominated for the position of Ombudsman or any judicial post.

The JBC is the constitutional body tasked with vetting applicants to judicial offices.

In a letter, the group of clergymen urged the JBC not to consider the application of Martires, who is believed to be one of the strongest contenders to the post which Morales will vacate by July 26.

“Martires’ refusal to inhibit himself from the quo warranto case despite the clear directive in the New Code of Judicial Conduct … shows his lack of probity,” it said.

The Constitution provides that the Ombudsman should have “recognized probity,” it said. “Martires has failed to meet this standard.”

Judge Carlos Espero II of the Davao City Regional Trial Court Branch 9 is also a candidate, but the JBC will no longer interview him because he also has a pending application for the position of Supreme Court associate justice.

The JBC will come up with a short list of qualified nominees, from which the President would appoint the country’s sixth Ombudsman to a seven-year term.

The group of clergymen accused Martires of implying that Sereno’s religious belief was “an indication of (her) mental illness” and that he had committed “patent abuse of power and authority.”

Martires has vehemently denied Sereno’s accusation that he “faith-shamed” her during the oral arguments on the quo warranto petition, a challenge to an official’s qualifications for the post.

Solicitor General Jose Calida initiated the quo warranto proceedings for Sereno’s failure to submit all her statements of assets, liabilities and net worth to the JBC when she applied for the top judicial post in 2012.

On May 11, the high court voted 8-6 in finding Sereno “guilty of unlawfully holding and exercising the Office of the Chief Justice.”

In his separate concurring opinion, Martires said Sereno “clearly made a consciously selective reading” of his brief exchange with her lawyer, Alex Poblador.

“Calling me a ‘faith-shamer’ hit me where it hurts most as . . . Sereno is fully aware that we have the same spiritual beliefs—that God is the reason for our success, the source of our happiness and the center of our lives,” he said.

The docket numbers of the complaints indicate that they were initiated only last year, although no complainant publicized his case against Bello during that time.

The JBC’s March 16 announcement for the Ombudsman post listed an Ombudsman clearance and various certifications of pending cases among the requirements for applicants.

Yet, Bello is still listed among the nine applicants scheduled to face the JBC in a public interview on June 20.

Asked why the labor secretary’s application was still entertained, Guevarra said: “It’s because [the pending cases] can still be resolved before the JBC en banc deliberates on [his candidacy].”

Rep. Reynaldo Umali, an ex-officio member of the JBC, said the council could still entertain Bello’s application but with less priority.