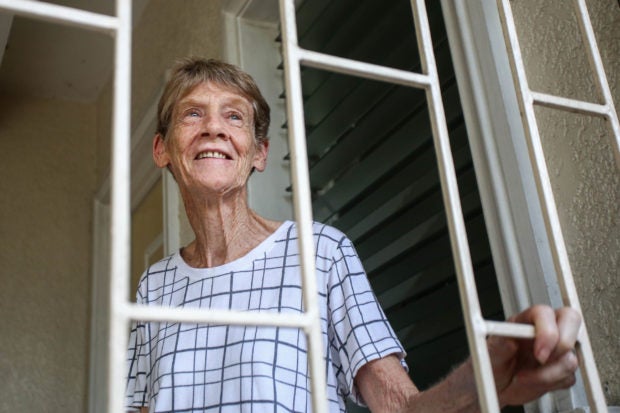 SIGH OF RELIEF Joy is written all over the face of Sister Patricia Fox as she welcomes news that Justice Secretary Menardo Guevarra has reversed a Bureau of Immigration order downgrading her missionary visa to tourist visa. —JAM STA. ROSA

In an apparent defiance of President Rodrigo Duterte’s directive, Justice Secretary Menardo Guevarra on Monday allowed Australian nun Patricia Fox to remain in the Philippines and proceed with her missionary work — at least for now.

Guevarra, who earlier said the President gave him a free hand in running the affairs of the Department of Justice (DOJ), voided the April 23 order of the Bureau of Immigration (BI) that downgraded Fox’s missionary visa to a temporary visitor’s visa for allegedly joining political activities.

The decision gave Fox a reprieve, but the DOJ also ordered the immigration authorities to hear a case on her visa’s cancellation along with pending deportation proceedings.

“I’m very happy. I’m pleased [with the ruling],” Fox said by phone shortly after the DOJ resolution was announced.

She said she did not expect the BI order to be reversed.

“I’m quite surprised,” she said.

Later, at Quiapo Church where she attended a Mass offered for slain priests, Fox told reporters that she would continue her missionary work.

“I will continue doing missionary work because that’s the expression of my mission,” she said.

“I’m not doing anything wrong anyway,” she added.

No authority to forfeit

Guevarra, who oversees immigration matters, said it was unlawful for the BI to revoke Fox’s visa and order her to leave the country within 30 days since it did not have the authority to forfeit the visa of a foreign national staying in the country.

“What the BI did in this case is beyond what the law provides. That is why it has to be struck down,” Guevarra said in his resolution.

“This office cannot sanction BI’s resort to a visa forfeiture procedure and [its] orders against Fox . . . To hold otherwise will legitimize its assertion of a power that does not exist in our laws,” he added.

But Guevarra also ordered the BI to hear the pending deportation and visa cancellation cases against the Catholic nun.

Said Guevarra: “Until a final resolution of the… proceedings is reached, or until the expiration of her missionary visa, whichever comes first, Sister Fox may continue to perform her duties as a missionary in the Philippines.”

“We will just have to wait and see what happens, whether that affects the deportation case, because that is separate from the visa issue,” Fox said.

One of Fox’s lawyers, Sol Taule, said the nun’s camp hoped the BI would rule in favor of the missionary in the deportation case.

The immigration bureau, an agency under the DOJ’s supervision, had ordered Fox to leave the Philippines on May 25, but she sought Guevarra’s intervention.

Guevarra acted swiftly on Fox’s appeal and allowed her to stay until June 18 pending resolution of her motion for reconsideration.

In challenging the BI order, the missionary nun insisted that the bureau violated her right to due process when it arbitrarily canceled her missionary visa without giving her a chance to answer the allegations against her.

“With all due respect, the board of commissioners of the [immigration bureau] decided a question of substance and procedure, which is not in accord with the Constitution, the law and jurisprudence,” Fox argued in her petition.

“Obviously, the cancellation [of my missionary visa] has no basis in fact and in law, especially so that [I] was not given the chance to refute the charges against me,” she added.

President Duterte earlier said his administration would not take back the BI order kicking Fox out of the country.

the President, at loggerheads with the Catholic Church over violation of human rights in his brutal war on drugs, blasted the 71-year-old nun for criticizing him.

‘Your God is not my god’

He said that instead of attacking his administration, Fox should return to Australia, which he accused of turning away refugees who were “hungry and dying.”

The President also admitted that it was he who directed the BI to run after Fox, a member of the Sisters of Our Lady of Mount Sion order who had been doing missionary work in the country since 1990.

“The Philippine law provides that I can deport you or refuse you entry if you are an undesirable alien,” the President said in a speech on April 18.

“Your God is not my god, remember that. Stick to your own religion and try to correct the abuses within your organization and address homosexuality, malpractices and adulterous priests,” he told Fox.

In voiding the BI order, Guevarra said the agency should have handled the case as a procedure for visa cancellation and not visa forfeiture.

Sought for an explanation, Guevarra said visa cancellation covered “specific grounds” and offenses such as fraud and misrepresentation.

“The BI adopted a procedure styled as forfeiture that did not address any of these grounds at all,” he said in a text message.

“As a result,” he said in his resolution, “the bureau has yet to decide whether the supposed actions of Fox do indeed justify the cancellation of her visa. It would therefore be premature for [the DOJ] to decide that matter now.”

“For that reason, we are returning this case to the BI for its proper disposition,” he said.

According to Guevarra, the BI was right in arguing that having a visa was just a privilege extended to foreigners visiting the Philippines.

“But just because visa is a privilege does not mean that it can be withdrawn without legal basis. The BI cannot simply create new procedures or new grounds to withdraw a visa already granted to a foreigner,” he said.

Sought for comment, presidential spokesperson Harry Roque said: “We respect that resolution by the DOJ secretary.” —With reports from Tina G. Santos and Julie M. Aurelio