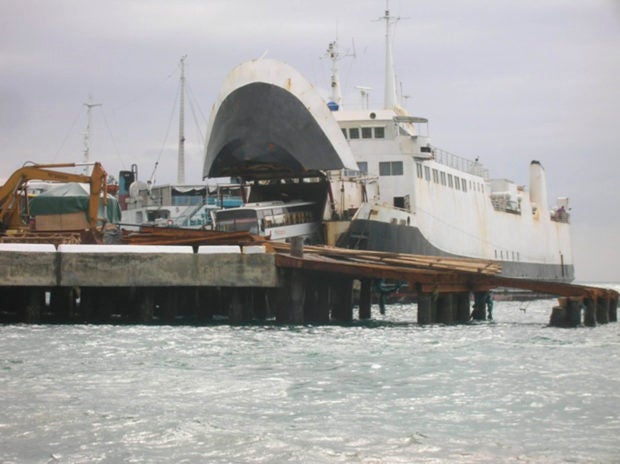 CHEAPER WAY Roll-on, roll-off vessels, such as this one at Caticlan port in Aklan province, offer a much cheaper alternative for interisland travel. They maximize the free use of the sea and all the government needs to do is build ports. —ARNOLD ALMACEN

Two years ago, Janine Reserva and other frisbee players of a Cebu club missed their boat ride home at a port in Maasin City, Southern Leyte, where they had just competed in a tournament.

They were forced to go to another port and found a boat that was scheduled to depart for Cebu City at midnight.

It turned out to be an ordeal during the eight-hour trip, however.

Reserva said some team members had to sleep at the canteen while others had to make do with makeshift hammocks strung to railings.

When reports came out that the Duterte administration plans to connect the Visayas with the rest of the country through bridges, they saw an end to the troubles of traveling by sea.

The prospects of an interisland trip by car excited them.

“It is also nicer to go on a road trip because you get to enjoy the scenery rather than be stuck in a boat where there are no stopovers and no footprints,” said Reserva, a 22-year-old visual artist who loves to go backpacking with her boyfriend around the country.

The government plans to build eight bridges worth at least P269 billion that would link the Visayas to Luzon and Mindanao:

Citing the country’s archipelagic character, Secretary Michael Dino, presidential assistant in the Visayas, said “the name of the game in the future is interconnectivity and logistics.”

“You cannot be a national brand if your products are not found in other parts of the country,” Dino said. “You can buy so many things online, but the problem is when it will reach you, how much will it cost to reach you.”

“If there is interconnectivity through bridges, it will be cheaper and faster,” he said.

Moreover, Dino said, it would spur development and tourism as lesser-known areas would be accessible.

If Mindanao would have a 2,000-km railroad system connecting its major cities, the Visayas would have bridges linking its central, western and eastern islands.

Local leaders have long been clamoring for the construction of the bridges.

Dino assured them that the national leadership was listening this time. “This is the marching order of our President.”

But two years into the Duterte administration, not one of the eight proposed projects have completed feasibility studies.

In a phone interview with the Inquirer, Socioeconomic Planning Secretary Ernesto M. Pernia said the Department of Public Works and Highways was still pencil-pushing on the Panay-Guimaras-Negros proposal. 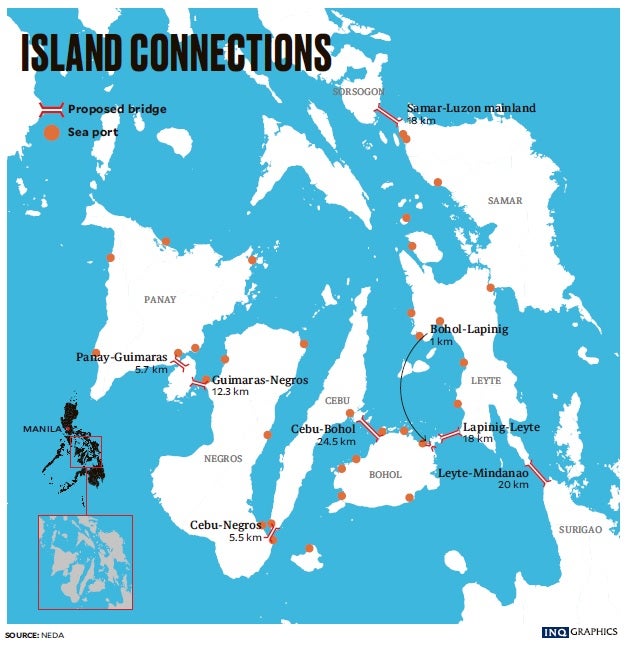 For the other projects, the feasibility studies will start either within the year or next year, said Pernia, who heads the National Economic and Development Authority (Neda).

He mentioned as possible sources of funding China’s “One Belt, One Road” initiative, the national budget, official development assistance (ODA) from other countries and public-private partnerships.

As of June 2017, a breakdown of the flagship projects posted on the Neda website identified China as a source of ODA funds still to be approved by the agency’s Investment Coordination Committee.

Despite the lack of feasibility studies, the bridge projects have target dates to start construction, but none for completion, except “TBA,” or to be announced.

Pernia said he was certain that the projects would start during the Duterte administration, but that their completion would depend on the complexity of design.

The next administration will be compelled to finish the bridges, or the people would be angry, he said.

“I will be lying to you if I will tell you ‘I’ll guarantee that it will be finished (during President Duterte’s term).’ But we will try our best. The technology in building is different from before,” Dino said.