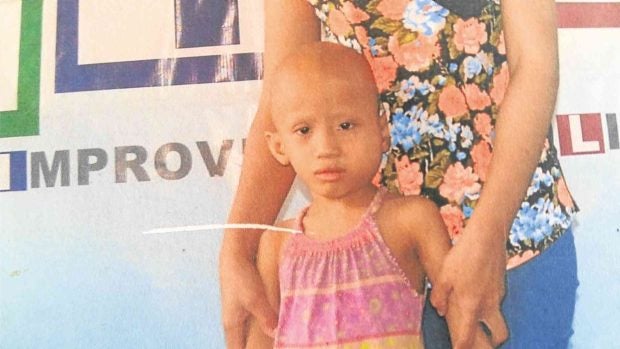 Two months after the lymph nodes in her face started to swell, Marthwena Frances Mejorada could no longer close her mouth without a lot of pain.

The 7-year-old girl was diagnosed with stage 4 Rhabdomyosarcoma (a type of cancer that affects soft tissues, such as muscle, fat, bone) on May 26, 2015.

“She would keep her mouth open most of the time during the day. Even swallowing her saliva gave her so much pain. She couldn’t sleep at night,” said Mejorada’s mother, Maria Rowena, a single parent from Hilongos, Leyte.

Maria Rowena said she left her two younger children with her mother in Leyte so that her daughter could seek treatment at Philippine Children’s Medical Center (PCMC) in Quezon City.

She and Mejorada are now temporarily staying at a charity house in Paco, Manila.

Doctors recommended 42 chemotherapy sessions for Mejorada, which were supposed to be done within 42 weeks.

But almost three years later, she has completed just 36 sessions because of delays due to weight loss, low blood count, nausea and weakness.

Maria Rowena said that her daughter’s 37th chemotherapy session would be done on June 22 at PCMC under Dr. Jerry Pua.

She asked for help from Inquirer readers because she would need P63,689 to pay for her daughter’s last six sessions.

Her former partner, a fisherman from Zambales, has not been giving them financial support.