EU lifts ban on all Indonesia airlines after safety boost 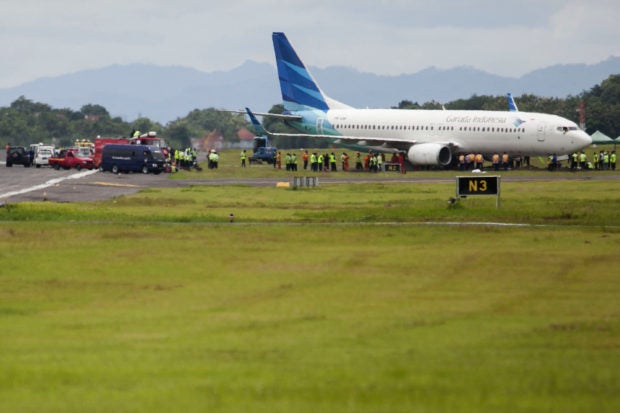 Officials examine the Boeing 737-800 Garuda plane that skidded off the runway at the Adisutjipto International airport in Yogyakarta on February 2, 2017. The Indonesian passenger plane, which was carrying 130 people, skidded off the runaway as it landed at the airport in heavy rain, the airline said on February 2, the latest mishap to hit the country’s aviation sector. / AFP PHOTO / SURYO WIBOWO

The European Union has removed all Indonesian airlines from its safety blacklist in an acknowledgement of their attempts to improve poor safety standards.

The bloc banned all Indonesia-based airlines from flying in its airspace in 2007 amid a string of accidents and reports of worsening safety standards following the deregulation of the country’s aviation industry in the late 1990s.

However, over the years, the EU has lifted the prohibition on seven carriers, including state-owned Garuda and its low-cost subsidiary Citilink, budget airlines Lion Air and AirAsia. That left 55 on the banned list.

Garuda was the only banned airline that flew to the EU but Europeans had been advised not to use other Indonesian carriers for domestic trips such as flights from Jakarta to tourist destinations like Bali or the cultural capital of Yogyakarta.

“I am particularly glad that after years of work, we are today able to clear all air carriers from Indonesia. It shows that hard work and close cooperation pay off,” said EU Commissioner for Transport Violeta Bulc in a statement on Thursday.

The move will boost the aviation sector in Indonesia, one of the fastest-growing markets in the world.

He added that domestic airlines can now be more competitive as they meet global aviation standards on safety.

Indonesia’s domestic aviation sector has long had a patchy record.

One recent incident was in late December 2014 when an AirAsia aircraft crashed into the Java Sea en route from Indonesia to Singapore, killing all 162 passengers on board.

Officials stepped up efforts to improve air safety after that disaster, including raising the price floor of domestic flights and punishing pilots found to have breached rules.

An assessment by the International Civil Aviation Organization in November 2017 noted that Indonesia’s flight-safety ranking had climbed from 151 to 55.

The country is hoping to welcome 17 million tourists this year, up from 14.04 million last year, according to official data.

“The big impact on the industry is not about the possibility of our airlines flying to Europe, but about aircraft insurance rates, the ability of Europeans to fly using those airlines in Indonesia and have insurance coverage from their European insurers,” he told The Straits Times.

The EU ban still affects 119 airlines from dozens of countries, including Afghanistan, Angola and Congo.