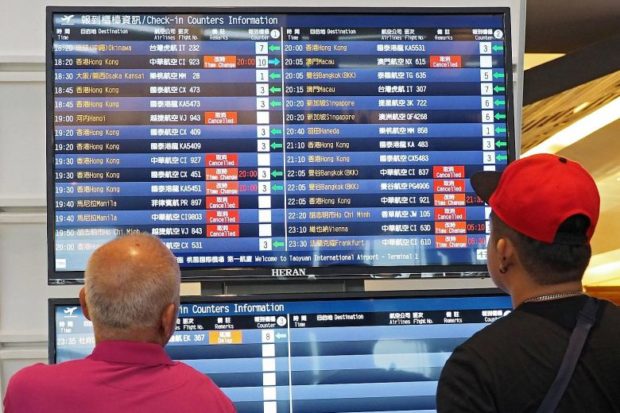 Passengers at Taiwan’s Taoyuan International Airport. China’s aviation regulator in April gave airlines a May 25 deadline to remove references on their websites that suggest that Taiwan, Hong Kong and Macau are countries independent of China. It later extended the deadline to late June.

Singapore Airlines (SIA) and its budget subsidiary Scoot have redesignated Taiwan as part of China on their websites, in accordance with Beijing’s recent demand, but drawing a protest from the island.

China’s aviation regulator in April gave dozens of airlines a May 25 deadline to remove references on their websites and in other material that suggest Taiwan, Hong Kong and Macau are countries independent of China. It later extended the deadline to late June.

The White House has described the aviation order as “Orwellian nonsense”, while Taiwan has repeatedly condemned it as “bullying”.

But several airlines have already made the change. They include Air Canada, Air France, Germany’s Lufthansa, British Airways and Emirates. Australia’s Qantas Airways said earlier this month that it was tweaking its site.

SIA said in response to a query from The Straits Times yesterday that it changed Taiwan’s designation on its website to “Taiwan, China” on Monday.

“As you know, we had received a formal letter from the Civil Aviation Administration of China, and the changes were made in response to the request,” a spokesman said.

Taiwan’s representative to Singapore Francis Liang told The Straits Times that his office has lodged a complaint with SIA and Scoot over the “unreasonable” move.

He noted that most Taiwanese travel on SIA and Scoot to visit Singapore, and they “would not be happy” to be confronted with Taiwan’s new designation.

Relations between Taiwan and China, which have been governed separately since 1949 after a civil war, have deteriorated under Taiwan President Tsai Ing-wen, who advocates eventual independence from the mainland.

Beijing’s demand to airlines appears to be the latest move by China to further constrict international recognition of Taiwan. Besides luring away the island’s dwindling diplomatic allies – most recently Burkina Faso – Beijing is cracking its whip on businesses.

Clothing supplier Gap and hotel chain Marriott have also come under pressure to amend websites or products that are perceived as slights to China’s sovereignty.

Ms Tsai yesterday denounced China for exerting pressure on international airlines to name Taiwan as part of its territory.

In a meeting at the presidential office in Taipei with Mr James Moriarty, chairman of the American Institute in Taiwan (AIT), Ms Tsai said Washington’s opposition to China’s airline gambit assures the Taiwanese people they have the support of the United States.

AIT is the US’ de facto embassy in Taiwan in the absence of formal diplomatic ties.

The US recognizes Beijing as the legitimate government of all of China, but has longstanding ties with Taiwan and is bound by its Taiwan Relations Act to protect the island.

Last week, the Financial Times said, citing sources, that US officials had asked American airlines, including United, American Airlines and Delta, not to comply with China’s demand.

Australian Deputy Prime Minister Michael McCormack and Foreign Minister Julie Bishop have also accused China of applying undue pressure on Qantas, the national flag carrier. But Qantas chief Alan Joyce said this month: “At the end of the day, the Australians, like a lot of countries, have a ‘one China’ policy, so (airlines) are not doing anything different than (what) the Australian government is doing.”

As of yesterday, Qantas and the three US carriers have not made the switch, neither have Japan Airlines and All Nippon Airways.