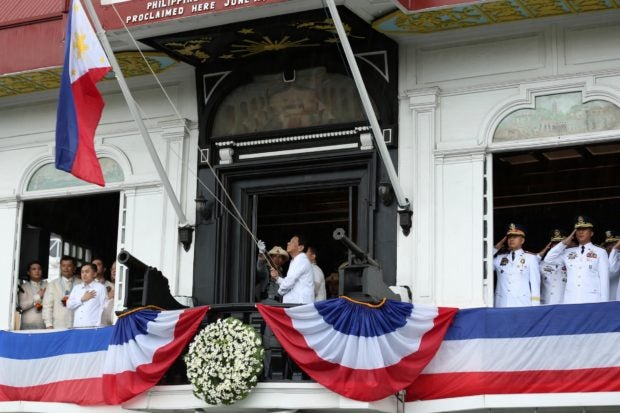 President Rodrigo Roa Duterte leads the flag-raising ceremony during the 120th Philippine Independence Day celebration at the Museo ni Emilio Aguinaldo in Kawit, Cavite on June 12, 2018. Also in the photo is Sec. Bong Go of the Office of the Special Assistant to the President RICHARD MADELO/PRESIDENTIAL PHOTO

Opposition Sen. Risa Hontiveros finds “so insensitive” the sight of China’s ambassador standing next to President Rodrigo Duterte as the latter waved the Philippine flag during Tuesday’s Independence Day rites at the Aguinaldo Shrine in Kawit, Cavite.

“I don’t know why the Chinese ambassador had to stand beside the President while he raised the flag, and why he spoke to our defense secretary — it was so insensitive of them in these times,” she said in Filipino.

Zhao spoke with the President about the complaint of Filipino fishermen, who accused Chinese coast guards of taking their catch at Scarborough Shoal recently.  —DJ Yap