Flag unites archipelago into one nation 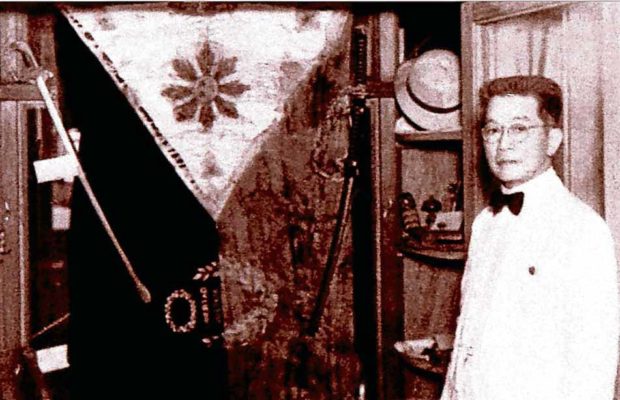 REVOLUTIONARY RELICS Emilio Aguinaldo’s cabinet of relics of the revolution at his home in Kawit, Cavite, included one of the flags used during the Filipino-American War. The flag is now preserved in Baguio City. —CONTRIBUTED PHOTO

Forged in the fire of revolution, bathed in the blood of our heroes, and sanctified by usage, the Philippine flag we inherited from Kawit on the afternoon of June 12, 1898, has become so commonplace that Filipinos today hardly notice it.

At worst, the Philippine flag is disrespected — used like towels by Filipino athletes competing overseas or, in a video that went viral, used to mop a dirty floor.

The late Sorsogon Rep. Salvador H. Escudero used to lament that the usual violator of the Flag Law was the government, flying faded, tattered flags in front of its buildings from the national level down to the barangay level.

Old and worn flags should be burned and reverently buried, a ritual that many find antiquated or obsolete.

Teachers and textbooks are often blamed for ignorance of the Philippine flag’s history or the confusion that arises from the different meanings read into its colors and symbols over the last century.

The first Philippine flag was made in Hong Kong in 1898, hand sewn and embroidered in silk by Marcela Agoncillo following Emilio Aguinaldo’s design.

Agoncillo was assisted in the task by her daughter, Lorenza, and Jose Rizal’s niece, Delfina Herbosa.

Aguinaldo took the flag back to the Philippines when he returned from exile in Hong Kong, and it was first unfurled, not on June 12 in Kawit but in the Battle of Alapan on May 28, 1898—a date now commemorated as National Flag Day.

This original flag is now lost, but a contemporary one, in cotton and once displayed in Kawit, is preserved at a private museum in Baguio City.

A silver thimble, used by Marcela Agoncillo in making the first flag is preserved at Malacañang Museum.

On June 5, 1898, Aguinaldo issued a decree setting the date for the Declaration of Independence on June 12.

On the same day, he commissioned Julian Felipe to compose some incidental music for the occasion, the “Marcha Aguinaldo,” which has come down to us as the tune for the national anthem.

Felipe composed the march for the piano and arranged it for a brass band that played it in Kawit on June 12.

Spanish lyrics were added by Jose Palma in 1899, which were translated for singing in English before World War II and again into the Filipino version we know today as “Lupang Hinirang.”

Different flags based on the Marcela Agoncillo original were made for use during the Filipino-American War, and they had different shades of red, white, and blue.

Sometimes there were more than eight rays in the sun, which was not always golden but sometimes red.

A face adorned the sun, like the sun in South American flags, but this was removed when the colors and elements of the flag were standardized during the time of Manuel L. Quezon.

Over time, even the meanings of the Philippine flag changed.

The June 12 Declaration of Independence states that the colors of our flag must resemble those of the flag of the United States, which assisted in the war against Spain.

Next year, in Malolos, Aguinaldo delivered a speech describing the flag as having “three colors, three stars, and a sun, the meaning of which are as follows: the red is symbolic of Filipino courage which is second to none, and was the color used during the war in the province of Cavite since the 31st of August 1896, until the Peace of Biak-na-Bato [in 1897]; the blue carries an allegorical meaning that all Filipinos will prefer to die before submitting ourselves to the invader, whoever he may be; the white conveys the idea that, like other nations, the Filipinos know how to govern themselves, and that they do not recede from observation of foreign powers.”

The Philippine flag and its symbolism has been challenged over the years.

Some say the flag is anchored in the events of 1898 and irrelevant to our times.

Others complain that the sun and its eight rays is partial to Luzon, which explains the moves to add a ninth ray to the sun to represent Mindanao, which already has one of the three stars shared with Luzon and the Visayas (Panay).

Aguinaldo said the sun and its rays “stirred up Filipinos and spread the light over their world, piercing the clouds that enshrouded it; it is now the light which brightens every spot in the Philippine islands, and under its influence the Itas, Igorots, Manguians, and Moros, all of whom I believe were made in the image of God, and whom I recognize as our brethren, now come down from the mountains to join with us.”

A national flag can include and exclude, depending on how it is read.

Going back to its history reminds us that it is meant to unite an archipelago with many peoples and languages and cultures into one nation.

The flag is a reminder that it was one thing to declare independence on June 12, 1898, and another to know what to do with that independence.